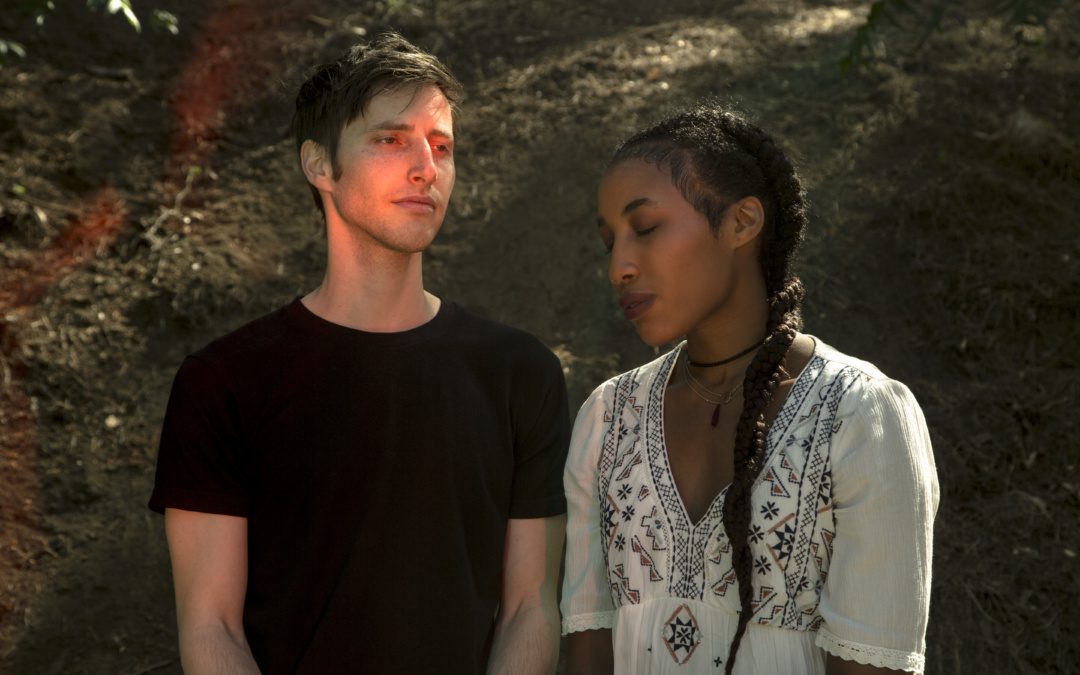 Expectations for the upcoming single, “Bridestep” from Brooklyn-based indie/R&B dynamic duo Moonheart are rising as each day prior to the release are mounting exponentially. Not only does the group have a sound unlike any other, they also have a message in their music of longing and endless romanticism that is haunting and beautiful. This track is the first to be release from their forthcoming debut full-length album Feel it Out. Although they are busy getting ready for the release, Moonheart was able to say a few words about who they are and what fans can expect within the next few months.

What would you consider to be your greatest success on and off of the stage?

Onstage, I’m really happy to feel very connected to my voice and what it sounds like. For a long time I was singing mostly jazz, and imitating all of my favorite singers when I learned the music. Doing that taught me so much about music in general, and about phrasing, rhythm and expression, but for awhile I was worried that I was without my own point of view. I definitely felt closer to my authentic voice and self when I started writing my own songs, and it feels good to be communicating that onstage.

Although you must be busy writing, producing and performing your music, when you do have free time, is there something that you like to do that may be out of the ordinary in order to destress and prepare for upcoming events and gigs?

I think this is probably pretty common, but I’ve found that for sure the most essential thing for me to get in the right headspace to play is lots of space and quiet. I live in Brooklyn and space and silence can feel sparse, but there are magic pockets of it everywhere. I’m lucky to live very near two of them, the botanical garden and the park. This is probably gonna sound so corny, but being in awe of nature’s design in the form of a flower or a tree or whatever it is is so humbling and I try to be surrounded by that stuff as much as I can. I recently learned about this Japanese healing practice called “forest bathing,” where you basically practice mindfulness and hyper-awareness of all of your sensory experiences while taking a walk in nature, and I guess this is kind of what I’m doing, or attempting to do. It feels really good when you can carry that open feeling with you on stage; your ego’s out of the way and the bad nerves that come from wondering what people are thinking or worrying that you look silly or whatever evaporate, leaving just the good butterflies to work through you.

As you continue to work towards your dream, do you have defined goals for Moonheart, or are you just enjoying the ride that your love of music has brought you on?

I wish I was cool enough to say that I’m not hella Capricorn and have notebooks and spreadsheets full of plans and goals but I do. The most immediate goal at the moment is to put out Feel It Out, our first full-length, in a way that we’re proud of. We’d also really like to start touring in a more serious and extensive way, so there’s lots of planning around that. Trying our best to enjoy the ride even in the planning stages, though 🙂

What news do you have for friends and family that are anxiously awaiting new music, tours and performances?

It’s coming! We’re releasing Feel It Out very soon, and we hope to be playing lots of shows to support that. Until then, anyone in or around NYC can come see our “Bridestep” single release show on Wednesday, April 4th at C’mon Everybody in Brooklyn.

As you have worked so hard to obtain something that, at one point, seemed so unobtainable, have you ever faced opposition that you thought that you wouldn’t succeed in overcoming?

My mental health is sometimes my biggest hater, so I’m unfortunately my biggest opposition, ha. Now I take good care of it and treat it like a baby, but I didn’t always have the ability to do that. When I didn’t, there were times I didn’t think I could turn my brain on or get out of a hole long enough to keep making music, but I’m grateful not to have been in that place for a long time.

What is the writing process like? Is it easy to sit down and write, or is it a spur of the moment occurrence?

The act of sitting down to write is actually the hardest part about writing in my experience- giving myself the space and time, sticking to the routine, and quieting the voices that would rather I procrastinate or do something else instead, those are the first hills to get over. Once there, though, the process depends on where I’m at that day. On the magic days it just flows, and those are songs I can’t really take credit for- some songs are already there and just need you to show up and be a vessel for them to come out. On days where nothing’s coming, I’ll try to do a writing exercise or read something beautiful and copy down phrases that are inspiring or words that feel good. The physical act of writing something pretty down on paper can sometimes wake up something dormant. Once I have a skeleton of a song, I’ll play it for Michael or send him a rough demo, and I don’t often give him much direction for the first attempt at building the world around the song. We have a lot of creative trust and a really open, intuitive channel between each other, and the majority of the time he just knows what I’m going for. He’ll usually work alone until things are in their place, and then we’ll iron everything out and edit together until we both feel the song is done.

After performing, is there a specific activity or tradition that you have to celebrate a “job well done?”

If we feel bad about it, we try not to let it feel too heavy and make sure to listen to the voice memo recording we always make of shows and take notes on how to make it better next time. If we feel good it about it, same thing 🙂

Keep up with Moonheart here.