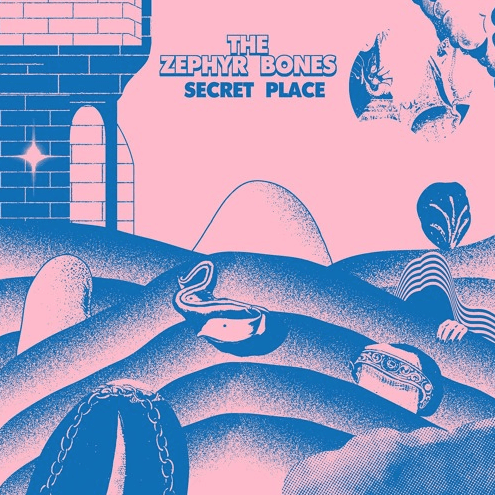 While the Barcelona-based psychedelic beach pop quartet The Zephyr Bones – comprised of Brian (guitar, vocals), Jossip (guitar, vocals, synth), Carlitos (bass), and Marc (drums) – was busy releasing singles from their debut album Secret Place, we clearly had our heads up our asses. But thankfully, we got a little taste of what’s to come just days ahead of its November 10th release. Packed to the brim with sparkling, nostalgic charm, we’re sure any number of the ten tracks on Secret Place will be on your permanent “good mood” playlist.

First track “Hurricanes” establishes that lazy, waning guitar sound we’ve come to admire in beach wave music. The vocals are layered, but almost fragile in the way they are delivered. That upbeat momentum continues into “Penny’s Week”, with its mesmerizing guitar riffs and and slightly-punk feel. “Juglar Child on the Carousel” might have one of the most odd titles we have heard in a while, but the track has a not-so-off-the-beaten-path 80’s synth wave aspect to it, which absolutely makes it the best song to premiere as the first single from the collection. It maintains a head-bobbing beat that revels in line with Bleachers and Grimes, almost catapulting you into fourth track “Las Olas”, which takes a contrasting acoustic path.

It’s with “I’ve Lost My Dinosaur” that an almost melancholic feeling overtakes the album. The song has this smooth, almost sensual, feel to the instrumentals, but the vocals are almost sad. That is, until mid-track when the tempo picks up and feels more frantic than anything for a stretch of time before heading back into its regularly maintained tempo-range. The title track begins with quirky, staccato notes that pull you into another sound space completely, as you experience the instruments almost fight for attention atop a bed of soft echoes. “Black Lips” exudes a little more edge in the beginning – Or is that the title talking? – but its overall feel is very “50s sock hop slow song” and we’re totally on board with that.

“September” slows the entire album down exponentially, and is one of those songs that really makes you appreciate the guitar as an instrument. We can imagine almost anyone sitting back in their chair, just reveling in the sounds that come from the speakers. (We suggest vinyl for this track to be totally nestled in the warmth of the moment.) “Telephone” is – without a doubt – a toe-tapper that eventually encapsulates you in fizzy, otherworldly bits of synth. For reasons unbeknownst to us, this is the one we have been playing on repeat. (Try to figure that one out for us, ok?) The Zephyr Bones have chosen to round everything out with tenth track “The Arrow of Our Youth”, which hilariously feels a little less throwback – despite its clear nods to the 80s and 90s – than its predecessors. Once again, the instrumentals take center stage and give you a feeling of being carried away.

Before the album abruptly stops and you cry a bit because you just didn’t want it to end. (Just hit “repeat all.” We get it.)

Secret Place is out November 10th and is available for preorder now. Keep up with the band here.