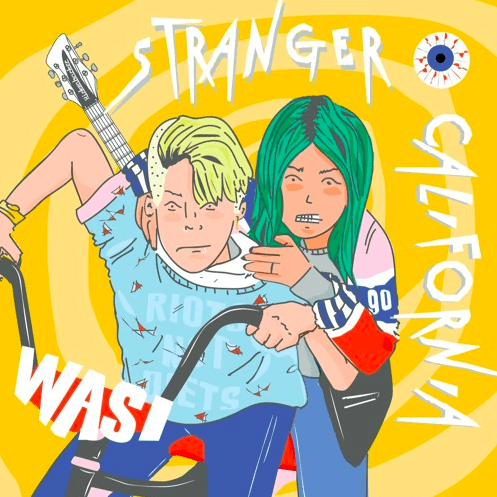 I kicked back and plugged the phones into my ears and suddenly felt the urge to go to roller skating at Skateland. Welcome to WASI‘s “Stranger California.” This self-proclaimed “riot pop” duo from California offers what I would classify as synth pop with ska guitar riffs and a solid beat. The lyric writing is well thought out and can seem like the perspective of an unseen observer on the outside looking in. With descriptors capturing the stereotype, “dirty beaches and hair that’s bleached out,” there is still a humble sense of being a part of the community in the line, “I can still appreciate the neighborhood thrift store.” You don’t have to live in California to rock this song. Just close your eyes and next thing you know imagination will take control allowing you to cruise the shoreline with the convertible top down as WASI provides the soundtrack.

Don’t let the title fool you “Stranger California” is a very fun, uplifting and carefree song. It would fit in well with a game of beer pong just the same as it would playing in the background with a group full of friends laughing as they cram themselves elbow to elbow on an old ratty couch.

This is the kind of originality that should be dominating the radio. While yes, “Stranger California” does remind me of MIA’s “Paper planes” there is a reason that song took off. And given the right audience, WASI could too. Be sure to keep an eye out as they will be on the SXSW bill and touring this spring as a supporting act to Caroline Rose.

Keep up with WASI here.