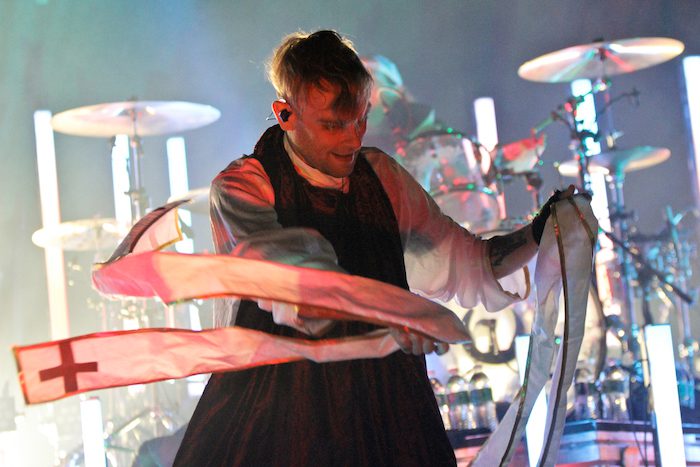 On Tuesday, October 31st, The Used took on the Uptown Theater in midtown Kansas City, Missouri to party it up on the most spooktacular evening of the year with help from post-hardcore favorite Glassjaw.

Members of the audience moved about the theater dressed as Clint Eastwood, Batman and Wayne Campbell of Wayne’s World. Not to be outdone, lead vocalist Bert McCracken debuted his look as the Pope as he twirled his garments and hat through “Take It Away” and “The Bird and the Worm.” Bandmates Jeph Howard, Justin Shekoski and Dan Whitesides also dressed for the occasion as a banana, the grim reaper and the Kool Aid Man respectively. McCracken’s ferocious vocals and the eerie Art Deco architecture adorning the venue’s walls added to the sinister night.

The band is touring in support of their just-released seventh studio album, The Canyon. The 17-track analog record stretches 80 minutes and is the first in which Shekoski stepped in for former guitarist Quinn Allman. It is also written as McCracken recovered from the sudden loss of childhood friend Tregen Lewis. Songs featured during the show included the Kurt Cobain-inspired anthem “Over and Over Again” and the live debut of the self-aware galvanizing chorus that is “The Nexus.”

Inspired by Michael Jackson to dance at the age of eight, McCracken refrained from performing his version of the Thriller dance. Though he spoke to the healing abilities of music and power of expression. “Try not to escape your problems but face your fears and maybe you’ll walk out (of it) feeling better,” he said.

Photographer Ashleigh Lee nabbed some stills for us, and you can check them out below!

Keep up with The Used here!