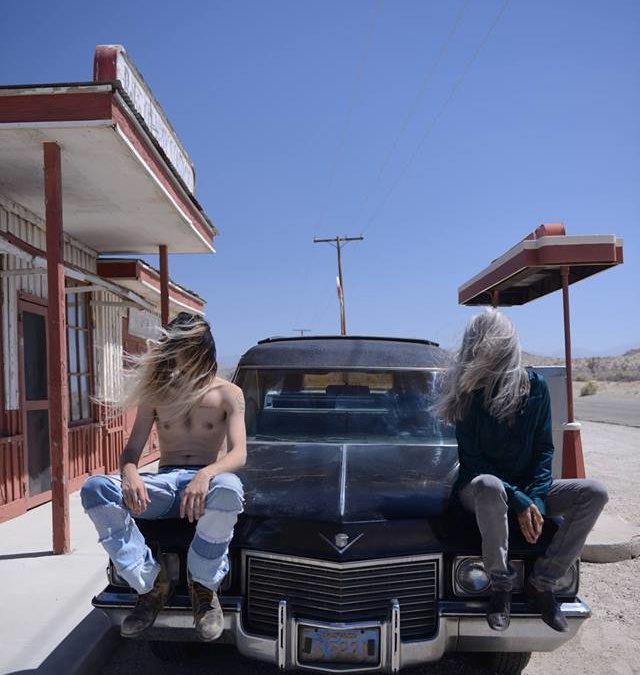 Los Angeles based band The Great Sadness – consisting of members Stephen McNeely (drums) and Cathy Cooper (guitar/vocals) – say they are “upset all the time and they put it in their music.”
When looking into The Great Sadness I started by getting acquainted with the video for “Underground” from their album Weep that was released in April of 2017. Maybe I just have a sick sense of humor, but I found nothing sad about this song while watching as the pair rode bicycles through a cemetery, stopped at the ice cream truck, the laundry mat, and hit up the massage chairs. As I was mid-laugh at the comical occasional middle finger, things got creepy and in their skull masks it felt as if death was out for a walk.
With lyrics boasting, “In this place, underground, there is no God,” one could embrace the sadness behind that realization. The further I descend into this album, the tonal quality and the words themselves do capture all that is wrong in the world. It is a sad place that we have created and The Great Sadness doesn’t sugar coat a bit of it. Cathy has an un-dusted gritty rasp to her voice reminiscent of Janis Joplin, Stevie Knicks, and early Melissa Etheridge. The music has a murky humidity that generates a grass rooted southern swamp rock feel as well as that D-tuned sludge grunge feel (don’t think Nirvana’s Nevermind album, think Nirvana’s Bleach album).
Being a D.I.Y. band and paying for your recording, production, pressing, touring can leave you financially depleted. The Great Sadness truly has a love for creating music no matter the cost and their hard work has paid off as they reached out to all of you to help release Weep on vinyl. Given the style of music, you want this on vinyl.
The shining moment for me was the song “Tonight.”  A droning sometimes psychadelic darkness seems so fitting as she sings loudly, borderline a scream while maintaining great vocal control, “this dance through hell has done us in, hold me love, my breath is thin.” The Great Sadness is best described by this scenerio, if only Linda Blair (the original Exorsist movie, the possessed girl) had a band.
Grab the vinyl release of Weep and sludge through the mucky darkness with The Great Sadness.