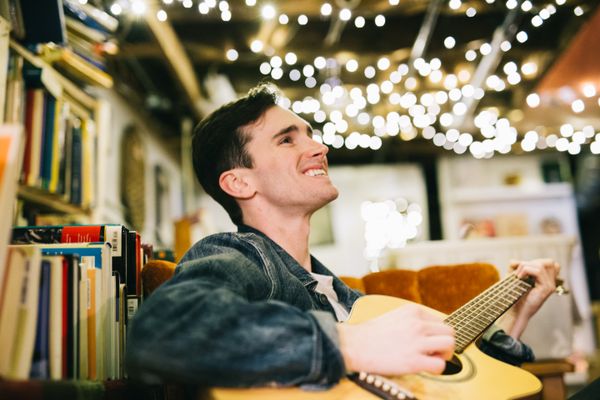 As he revs up to release his new track “Passenger’s Side” this Friday, Ontario-based folk rock talent John Muirhead seems to be absolutely glowing with excitement. His music – which has an almost Broadway musical feel to it with the way he emphasizes every syllable and makes sure his audience is crystal clear on his meaning – is absolutely captivating, the new track setting the tone for what’s to come later this year. Check out our quick hit interview below, and be sure to peep the new song on Friday!

Your new single “Passenger’s Side” is amazing. How has your music evolved since releasing your first EP Yesterday’s Smile?

I’m still very proud of Yesterday’s Smile, but with it being my first EP, the whole record was a learning process. I learned a lot about how to be comfortable in the studio and how to create interesting arrangements that serve the song. The songs themselves were written between the ages of 16 and 19, so looking back as a more mature songwriter there are definitely some things that I would change if I were to do it all over again.

With “Passenger’s Side” and the rest of Foundational (The new EP, released in June 2018) I’ve taken the experience from Yesterday’s Smile and applied it. I feel that my voice has matured, my confidence has grown, and the songs are more representative of myself.

What message would you like your fans to get from “Passenger’s Side”? (Out April 6th)

The song is about defying the feeling that maybe our best days are behind us, and the appeal and romanticism of leaving it all behind. With this song I hope that listeners know that they’re not alone in that feeling.

I also hope the song can be the soundtrack to late night drives and lazy Sunday mornings.

How have you grown as an artist since you first began making music?

I think I’m just more sure of myself as a musician. I’ve sharpened up my guitar playing, singing, and performance through the constant repetition of touring and playing live, and my songwriting is getting closer and closer to the level I want it to be. My artistic vision is much clearer now, and I know what I want to accomplish in music.

What is your favorite thing about making music?

In a much broader sense, my favourite thing about music is the fact that it’s a universal language. Regardless of language or culture we can all connect to music, and it plays such an integral role in all of our lives. I’ve made so many meaningful connections to people through music that I may not have had if I didn’t play, and I think that’s amazing.

What inspired you to begin making music?

Like a lot of musicians my age, Guitar Hero actually played a big role in inspiring me to pick up a real guitar. It introduced me to so much great music and it felt really cool to hold a guitar in my hands. When I picked up a real guitar it felt amazing to actually play the songs from the game and from there it didn’t take long to start writing.

What musicians would you say inspire you as an artist?

There are too many! I would have to say Frank Turner would be one of my biggest influences, he bridged the gap between my indie/punk rock upbringing and my current appreciation for folk music. Seeing the intensity of his work ethic and reading about his crazy tour stories really made me want to push myself to the limit as a musician. Recently I’ve been really inspired by Brian Fallon, Jason Isbell, Phoebe Bridgers, and a whole bunch more.

Following the release of your new EP this spring will there be a tour in the future?

Yes! I will be heading out to Eastern Canada in June, touring as part of VIA Rail’s Artist on Board program. I’ll be announcing all of the dates shortly, make sure to follow me on social media to stay up to date!

Keep up with John Muirhead here.