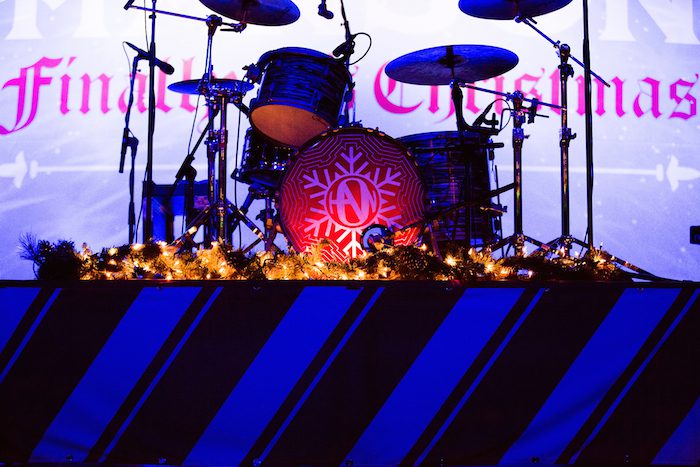 The line wrapped around Times Square, making a mess of Broadway. Swarms of fans covered themselves in swaths of red and green, draping blinking Christmas lights across their bodies and topping them off with Santa hats. And some were decked out another way: t-shirts with pictures of three smiling brothers were the most common, and even fashionable, accessory.

Right on the heels of their Middle of Everywhere tour, honoring 25 years as a band, Hanson was intent on closing 2017 with a bang. With October 27th’s release of their new Christmas album, Finally It’s Christmas, Hanson added an implicit nod to their fanbase. Every year since the release of their first Christmas record twenty years ago, Snowed In, Hanson’s fans have been eagerly and incessantly clamoring for another. And this year, an early Christmas gift arrived, complete with celebratory shows in select cities, almost all of them sold out. November 28th was the first of Hanson’s two-night run at the PlayStation Theater.

The stage was set, adorned with lights and garland, readying the audience for what was to come as greetings were given, drinks were purchased, and laughter wafted through the air. Projections of snowflakes swept across the floor, lending a more wintry feel to a surprisingly warm November night.

And then the lights were lowered. Screams, cheers, and claps commenced as Hanson stepped out, each formally dressed as if on the way to a holiday party; guitarist Isaac Hanson sported a green tie, drummer Zac Hanson a red bowtie, and pianist Taylor Hanson with a blue scarf dotted with white, resembling the snowflakes on stage. Immediately breaking into “Finally It’s Christmas,” the triumphant first track kicking off the new album, the crowd began singing along at the top of their lungs; they already had it memorized. Accompanying Hanson was a saxophone player, who often danced in coordinated movements with their bass player, laughing as they did so and giving a new meaning to the word “merry.” With this inclusion, Hanson’s sound was more jubilant than ever before, an elevation to a fuller, louder plane, similar to 2010’s Shout It Out, which features horns on many of its tracks. Hanson crafts each song in a different way, and are always up for experimentation. With 25 years under their collective belt, they search for new and innovative ways to enhance their music, and this new record is proof.

Hanson not only played songs off Finally It’s Christmas, but also songs off Snowed In. Though they were only children at the time, they still penned three original Christmas tracks, “At Christmas,” “Christmas Time,” and “Everybody Knows The Claus” as well as their own medley of “O Holy Night,” “Silent Night,” and “O Come All Ye Faithful.”

There were too many highlights of the show to count: you could say the best part was Taylor walking to the front of the stage during “Christmas (Baby Please Come Home),” shaking a tambourine and encouraging the crowd to sing background vocals with Isaac and Zac. Or when Isaac issued a challenge to the audience during “Til New Year’s Night,” one of the most standout tracks on Finally It’s Christmas, imploring the crowd to name each reindeer before launching back into the song Chuck Berry-style. Or maybe it was when Zac took over the piano during “Please Come Home,” his voice soaring over the keys while Taylor played drums. Objectively, however, it was “Joy To The Mountain” a capella that stood out the most, with Hanson’s harmonies in flight, echoing from floor to ceiling in the near-silent theater. It grabbed the audience and arrested them into a quiet trance, the lull of a Christmas lullaby.

The end of the show featured “Everybody Knows The Claus,” one of Snowed In’s most beloved tracks. Everyone was dancing with abandon, recalling the days of childhood and the mad dash to the local record store on the day Snowed In was first released, relishing every bit of it, second after second, minute after minute, meticulously taking it all in on cassette tape. And 20 years later, those experiences and memories are still emblazed in the brain and heart, which is what made this show so meaningful. Hanson always delivers to their fans, giving them nearly two hours of music, finally ending the encore with “Have Yourself A Merry Little Christmas.”

It was the perfect note to end on, allowing a moment of reflection and pause before the final bow and goodbye—until 2018.