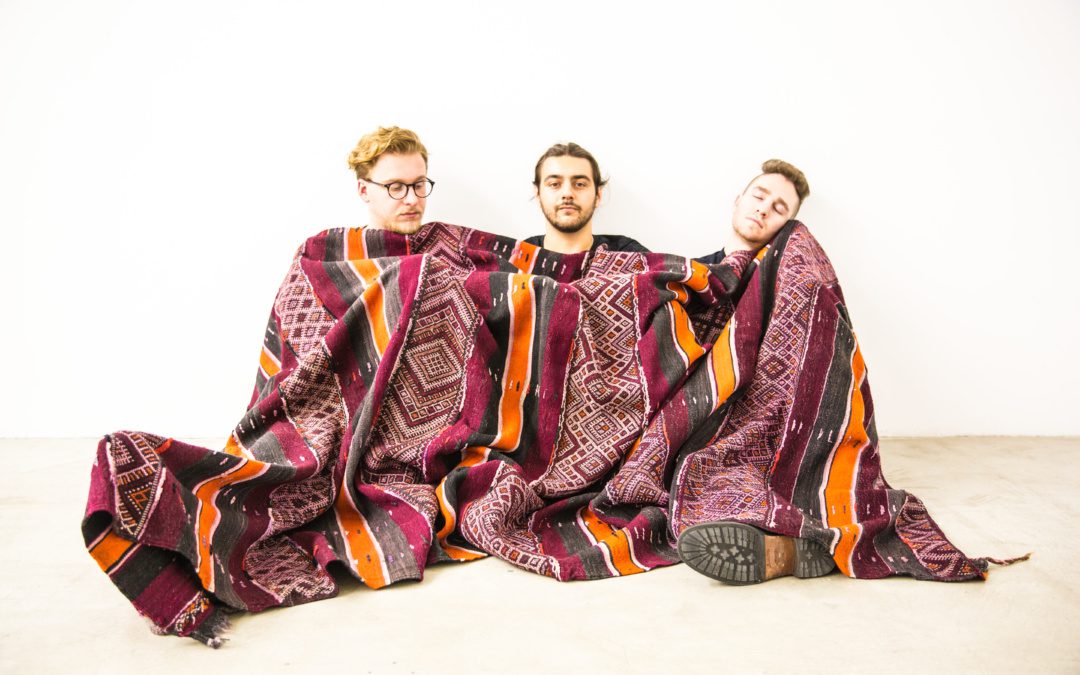 In August, New York based rock trio Upright Man – comprised of Aidan Dolan (guitar/vocals), Nick Katz (bass/vocals) and Max Yassky (drums / percussion / background vocals) – released their debut self-titled album. Packed to the brim with guitar-driven psychedelia and well-rounded, intense – yet somehow innately relaxing – vocals, the ten track album made a strong impact on its audience almost immediately. Exploring a wide soundscape with the prowess of a much more experienced band, we’re under the very strong impression that Upright Man is here to stay, and they’ve certainly left a mark.

We caught up with the guys briefly before the holidays to get a little insight into their process and more. Check it out below, and get your ears on Upright Man if you haven’t quite yet!

Max: It’s either “Only The Lonely” by Roy Orbison, or “Busted” by Ray Charles. Thanks Mom.

Aidan: Though I had heard music everywhere before I knew what it was, the first album as a whole that I became aware of was probably Jimi Hendrix’s “Are You Experienced?” It was in the CD player in our car that we took to and from school. The attitude and badassness was so obvious to me as a little kid and I still feel the same way.

Nick: Probably “With The Beatles” or “Help!” Though I discovered at 14 that I already knew all the words to “In My Hour of Darkness” by Gram Parsons even though I had no memory of listening to the record before. So I think I heard a lot of music before I was really making memories.

We know you met at NYU, but what is the Upright Man origin story like? Was it a meet-cute?

Max: I had to look up meet-cute. No it wasn’t anything like a romantic comedy, but we all did hit it off pretty quickly. We met and hung out as peers in school and then started making music for other people’s projects. We – all three – started making prog-jazz-classical music before we moved on to the space-rock music we’re making now.

Your self-titled debut just released. What has that been like for you?

Max: Releasing an album feels like the most foreign part of making music to me. We play and write so much that sometimes I forget the end goal is for other people to hear it. I’m kind of stunned when I imagine strangers listening to it.

Aidan: It feels good to enter a new stage of development for the band. Now that we have a completed product, we have to get it out there and take the band on the road. Our passion is music and creating it, but as musicians and a band, we have to take responsibility for so many aspects of the business of being a band as well.

Nick: There’s inherent satisfaction in seeing things finished. Having people seem to like it is just a nice little bonus.

Max: We had a fight with a very obstinate restaurateur. We ordered enough tortilla chips and guac to fuel a small force of underpaid interns, but got zilch. When we called up the restaurant, instead of your expected “Oh we’ll fix it”, we got put on hold while the owner checked the security tapes and assured us that all the chips left with the delivery fella. What do you do, right? Try and explain the laws of physics? Zero tortilla chips delivered to us = zero tortilla chips delivered to us. We each tried to explain this to the owner and finally our producer hung up dejectedly.

Aidan: While we were recording at Avatar Studios in NYC, we decided to use the physical reverb chambers, which are located somewhere in the stairwell of the building. We realized the mics in the reverb chambers were picking up this whole class of elementary school students playing outside, creating a really eerie far away sound of children screaming and laughing. We decided to record that and even took it a step further by running outside and asking them all to make as much noise as possible to be on our record! It sounded awesome, but we never found a place for it. Maybe next record..

Nick: It was awful and I hated every minute of it … I’m just kidding, I love being in the studio.

If your album were any Thanksgiving meal dish – an appetizer, main course, side dish, dessert, drink, whatever – what would it be and why?

Max: It’s the unidentifiable yet delicious troth of hot mash brought by that one obscure work friend of your cousin’s.

We really love the composition and overall sound of “Ecstasy”. What inspired that song – if we may ask – specifically?

Max: Thanks. When we were writing it I remember thinking of this image I had in my head from a news clipping. Apparently some of the older folks in Gaza would sit on this one couch on the edge of the city, eat watermelon, smoke cigars, and watch the chaos as if it were a television program.

Aidan: It started off on guitar as the little intro chorus/riff. The lyrics sort of came from describing a feeling of pure resignation and disconnection from the world, while still being ironically blissful in its comfort. There is a moment of self realization and hopefulness in the song, but some things never last. The form has an interesting way of mirroring that emotion in a developmental way.

Nick: It was born of self restraint in a way.

Being a musical project located in NYC has its advantages and disadvantages, of course, just as any place else does. Have you been able to navigate the highly saturated music scene in NYC to find some of your favorite gems?

Max: That saturation is one of my favorite things about the city. It does make people cynical about exploring new music, but for studios, venues, stores and new people to meet, being here is a total boon. Of course you meet great people everywhere and there’s plenty of shit here too.

Aidan: The saturation is advantageous in the way that Max says, giving you so many options to experience many different types of music at a high level musicianship, but as a band in its nascent stage, you have a lot of other bands and forms of entertainment to compete with on any given night, so it’s hard to grow beyond the audience of your family, friends, and friends of friends. There is a very elusive sense of a scene and you have to really make a ruckus to get people to come to your show over something else.

What are you most excited about with your debut album?

Max: Having a copy.

Aidan: Seeing and hearing other people’s reaction to our music.

Nick: Getting to the next one.

The band will be playing a show in honor of an upcoming video release and Aidan’s birthday at Mercury Lounge. Tickets are available now. Keep up with Upright Man here.