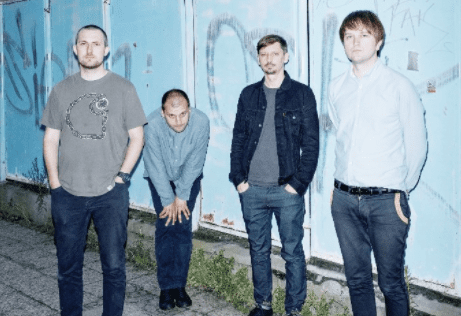 Polish alternative band Trupa Trupa – comprised of Grzegorz Kwiatkowski, Tomek Pawluczuk, Wojtek Juchniewicz, and Rafał Wojczal – released an eleven track collection titled Jolly New Songs at the end of October. Packed with intense attitude and reverb for miles, the album’s sound will keep you captivated as it trudges through first track “Against Breaking Heart of a Breaking Heart Beauty” until the last fourth, when it enters into an even darker soundscape and really thrashes into “Coffin”, which enters into the light, indie pop realm with its sound. By the end of it, you spiral into a feeling of falling, which is perfect because the third track is a frantic attention-getter that swirls into a dreamlike state-inducing trance track titled “Falling”. And while “Mist” is darker, led by percussion, the title track keeps a pleasant sound to the vocals, as though it’s staying on the polite end of the soundscape almost because of its title. That’s all well and good, until the song takes on an almost Tim Burton flare and spirals into a heavy instrumental cacophony that feels dangerous and inviting.

“Leave It All” is as melancholic in sound as the title would suggest, though the song itself leans more toward an off-kilter lounge band sound, though the theatrical nature of “Love Supreme” draws us into a Wizard Of Oz-meets-death march realm where Tim Burton’s antics feel slight and far away. “Never Forget” pulls us out of the darkness and plunges us into a dark alleyway, where we’re almost marching forward, decked out in combat boots and a leather jacket. “None of Us” reminds us of a dark and murky lullaby – perhaps for Satan’s children more so than anyone else – with guitar riffs that could swallow your ears whole. The tumultuous instrumentals in “Only Good Weather” remind us of the so-called reliability of the National Weather Service (ha!), replete with waning guitars and a swirling, psych rock bed of sound. And – if you ask us – Trupa Trupa did us a service making the crashing sounds of “To Me” the last track, as it, too, splinters into an uproar of crashing cymbals and intense rock vibes before leveling out and inducing a feeling of calm with its listeners.

Every emotion is palpable with Jolly New Songs. You just have to let it envelope you.

Jolly New Songs is out now. Keep up with Trupa Trupa here.