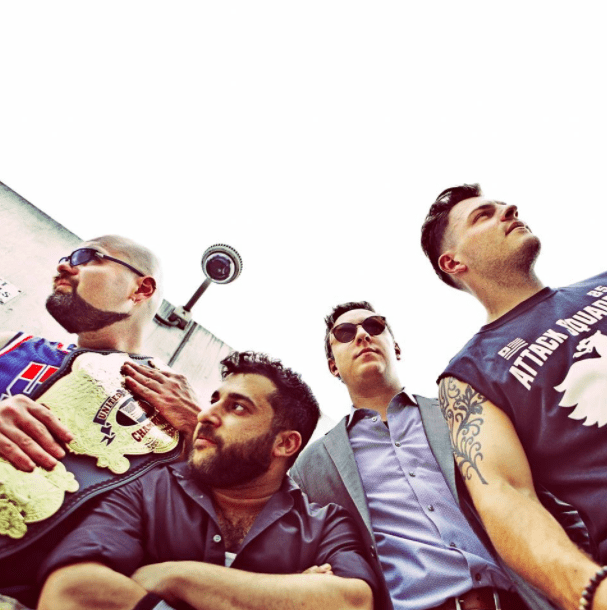 On October 27th, New York-based experimental group The U.S. Americans – comprised of Jeff Weiss (Vocals/Guitar/Percussion), Emerson Williams (Drums), Daniel Deychakiwsky (Bass/Guitars), and Roy Abraham (Guitars) – released twelve track full-length Greatest Hits to what we are sure has been nothing but thundering applause. Those of you who have yet to witness what we’re talking about are in for a real treat, as the very beginning of the entire album includes that fateful quote from Miss Teen USA 20017 when Miss South Carolina made herself – and probably our entire country – look really, really intelligent. You can’t argue that a good punk song speaks to the establishment, and where better to start than with the lack of common sense displayed by the majority? Plus, add that killer guitar solo we’re not sure we’ve witnessed a better record intro.

“Money in America” comes in rough, dark, and brooding in its instrumentals, with attitude for miles in the vocals. “Dance Song 17” brings the sound back to a more pop space, while “Innocent Fools” makes you feel like you’re in a funk jam session. And while “Manolo” hits like a 70s rock track – and trust us, we’re totally into it – “Movies” slows everything down to progress into intense guitar licks and a real metal twinge to them, a rock ballad that could stand the test of time if we let it reach notoriety of any sort.

“Fade Out” meanders on at a crawl, a little more 90s grunge/rock feel of melancholia about it. But “Storytime” seems to lighten up the narrative, showcasing a short story of less than a minute, and bringing us into more of a lighthearted headspace. “King Someday” brings The U.S. Americans back to their attitude-ridden antics, though the otherworldly references are fun in a modern-alien advocate-type of way. “Lazy Suzy” hilariously picks up the tempo more than its predecessors, making us actually feel like we should get up and dance over really anything at present. “FCK THE KGB” is pretty self-explanatory, a hard-hitting, no-holds, barred, pure punk track that completely rejects certain aspects of modern history, and understandably so. The U.S. Americans end the album in the most American way possible… with the guitar-driven track “Dentist Street”. A light rock – almost folk – feel envelopes the listener in a familiar warmth, as the waning guitar increases the magic of it all.

Greatest Hits is available now. Keep up with The U.S. Americans here.