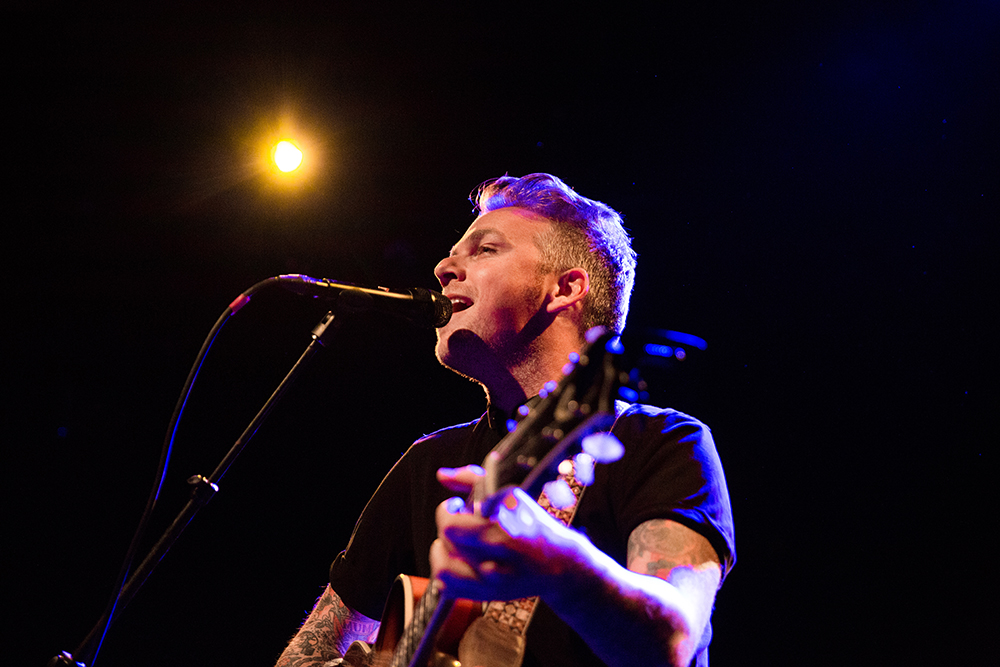 Acclaimed singer/songwriter Greg Holden made his return to New York City on September 23rd. Opening for Butch Walker, who produced his single, “On The Run,” Holden’s performance was like a homecoming. It’s a rare thing for an opener, especially one singularly armed with an acoustic guitar, to hush Irving Plaza from front to back, but Holden managed to wield this uncanny power with effortless ability.

When Holden first emerged from the side of the stage, the crowd’s vigorous, impassioned applause was astonishing. He strolled out with an unassuming, quiet confidence and began strumming as the audience quickly fell silent. As his 7-song set kicked off, Holden was oftentimes chatty between songs, lending an affable familiarity with a room of people whom he’d never met, treating them like valued friends. Constantly encouraging the crowd to sing and clap during parts of his songs, Holden’s set was interactive, a joint, group effort.

On “Home,” Holden issued a command for the audience to stop their feet in time to the beat. In turn, he received an eager assent as the stomps echoed throughout the venue and shook the floor. Holden’s newest track, “The Power Shift,” was prefaced by a quick lament, noting Donald Trump was currently in the city. The audience loudly booed, prompting Holden to launch into this political song, calling others to recognize the link between power and inequality, and one that was more than well-received in New York City.

“Boys In The Streets,” arguably Holden’s most moving song, showcases his lyrical prowess, one that is omnipresent throughout his work. Telling the story of a father struggling with his son’s sexuality, it’s only on his deathbed that he makes a confession: his intolerance was due to what he was taught growing up. He finally understands and encourages his son to be himself. Holden’s live performance evoked the pathos and pain of both son and father, and cheers went through the crowd as Holden reached the uplifting conclusion.

Lastly, Holden performed “Hold On Tight,” a triumphant, empowering song that bursts into a big, gleeful chorus as he sang an urgent warning: “don’t take your life for granted.”

It was an awe-inspiring set from a seasoned musician, one who will no doubt be back to New York City in the future. 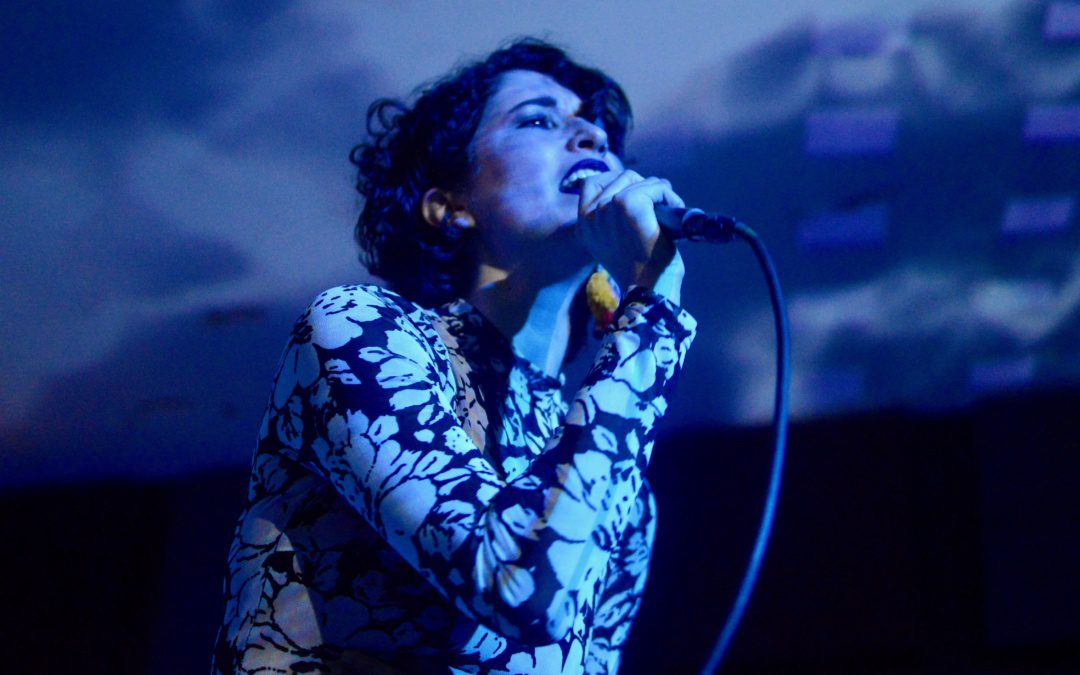 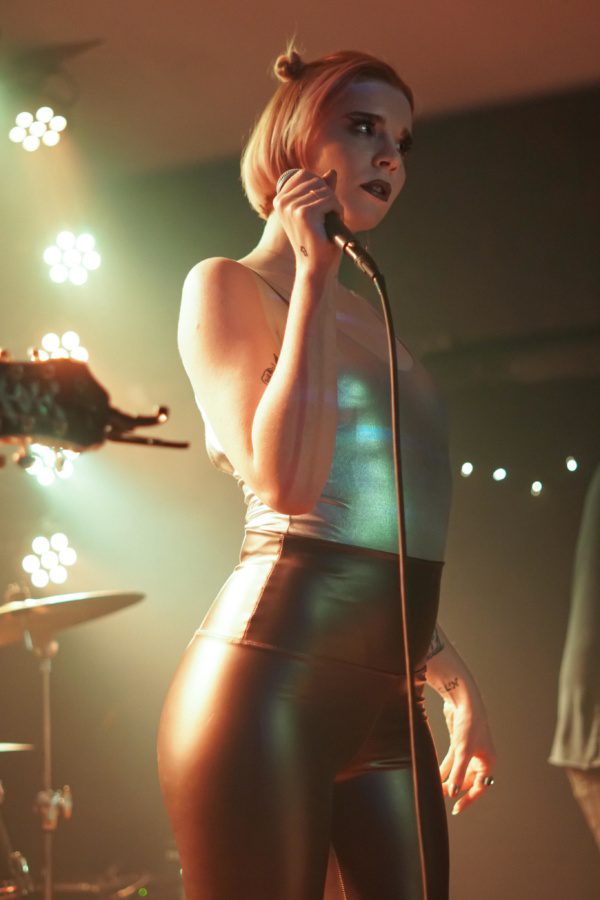 Pop can sometimes feel like an afterthought in the rock and country-saturated musical landscape of Nashville, but Thursday night’s show at the East Room made it clear that Nashville’s pop scene is anything but marginal. POP MONSTER (a dual release party for local artists Whoa Dakota and Athena, hosted by Popsquad) showed that pop in Nashville is as varied and exciting as the people involved can imagine it to be. Four artists with unique takes on the different shapes pop can take proved what the Nashville pop scene is truly capable of: churning out emotionally nuanced and stylistically ambitious bangers.

Meaux opened the evening strong with her sensual electro-pop, a fusion of soulful and experimental sounds that provided an effortlessly changing landscape for her rich voice to traverse. Her powerful pipes and impressive dance moves energized the room as she stalked the stage in a split length red cape. Color-shifting gauzy lights set the tone in the room, a cozy dream cave that looked as if it had been styled by the collective efforts of Prince and the Little Prince. Between sets the alchemy in the room was maintained through a mixture of 90’s throwbacks and electro-pop, the dreamy vibes in the room conducted by the cotton candy stellariums (made by Athena) hovering moodily above the crowd.

Next was Soren Bryce, a Brooklyn local who’s no stranger to the Nashville music scene. Soren’s writing and performance seems to transform to keep up with the rapid pace of her own ever-expanding taste. It’s a testament to how talented Soren is that she can take a left turn away from the fantastic music on her last unreleased EP (largely synth-based) to the more guitar-centric rock we heard on Thursday—and accomplish it so effortlessly. Clearly there’s no genre of music that Soren can’t master, as demonstrated by her fantastic set: a grungy pop punk watercolor that borrowed from Kurt Cobain, Lorde, Joe Jackson, Elliot Smith and Fiona Apple without ever losing its own distinctive style. Soren’s varied influences find her a sound all her own, as well as a gravity at the mike that holds the center of any room she’s playing for. The thread that weaves through her stylistic choices is always her voice, melodic with an expansive range that she wielded precisely like a scalpel to cut through the colorful fog in the venue. 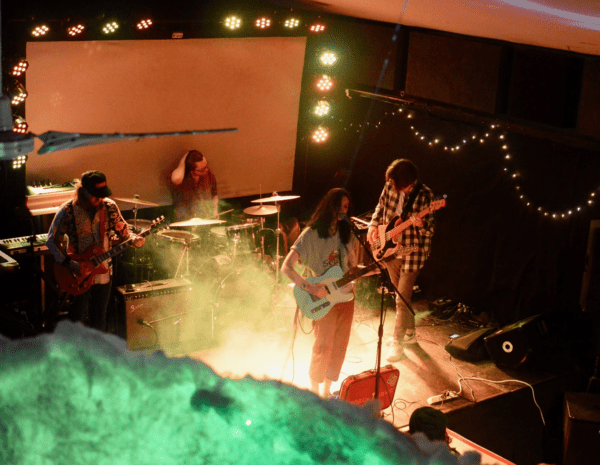 Athena played third in a powerhouse performance that you’d never know was her debut effort. She was right at home in front of an audience, prowling the stage in silver spandex like a modern day Xenon, an early 2000s fever dream kicking through pink fog clouds in Adidas stripes. Athena approached her performance with a fierce vulnerability, swinging from charm to rage to melancholy in a way that always felt authentic. She brought the crowd into her circle of trust and pulled them along for her journey—and despite (or because of) the emotional depth each song was catchier than the next, equal parts Paramore and Nelly Furtado, Athena bopping around the stage with her heart in her hands. If this was only her first show, I’d recommend showing up for Athena’s second show.

When Jesse Ott aka Whoa Dakota took the stage, she wasn’t afraid to own the space, immediately splaying herself out on the attached runway while the crowd encircled her. The show also served as a release party for the new single “Right Now” off of her upcoming album “Patterns,” but she saved that for the end of the show, satisfying the audience in the lead-up with her electrifying and adventurous performance. Her bold, anthemic sound imbued all of her songs with an epic energy, getting the crowd dancing and hollering along with her as she navigated the room in her floral bodysuit. It had the feel of a good block party—the raucous happiness, variety, community energy. Whoa Dakota delivered with their surprise guests, hauling Alanna Royalle and Jung Youth out of the crowd to sing and rap respectively alongside her, with Robert Gay joining on trumpet and Anthony Jorissen on sax. During “Patterns,” the hit for which a music video recently came out, it seemed like the whole room was bellowing all the words alongside her. The show’s joyful climax was a surprise birthday celebration for Ott’s 28th birthday, including a rendition of the birthday song led by friends from Pet Envy and Molly Rocket, and punctuated by an amazing display of cupcakes this reviewer found to be delicious. 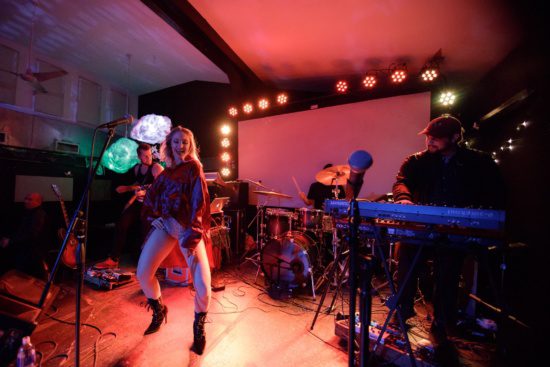 Whoa Dakota’s ambitious, ecstatic performance was the perfect series of exclamation points on which to end the evening. Each performer showcased a different side of pop music and played to the infinite potential within Nashville’s nuanced pop scene. It was especially heartening to see a fantastic, well-executed show that just happened to be led both in front of and behind the scenes by female talent. Without billing itself as a girl power show, POP MONSTER reminded us that there’s a surplus of talented women with vision leaving their marks on the Nashville music scene—and with shows this collaborative and joyful, we should definitely be supporting that.

Keep up with Whoa Dakota here and Athena here. 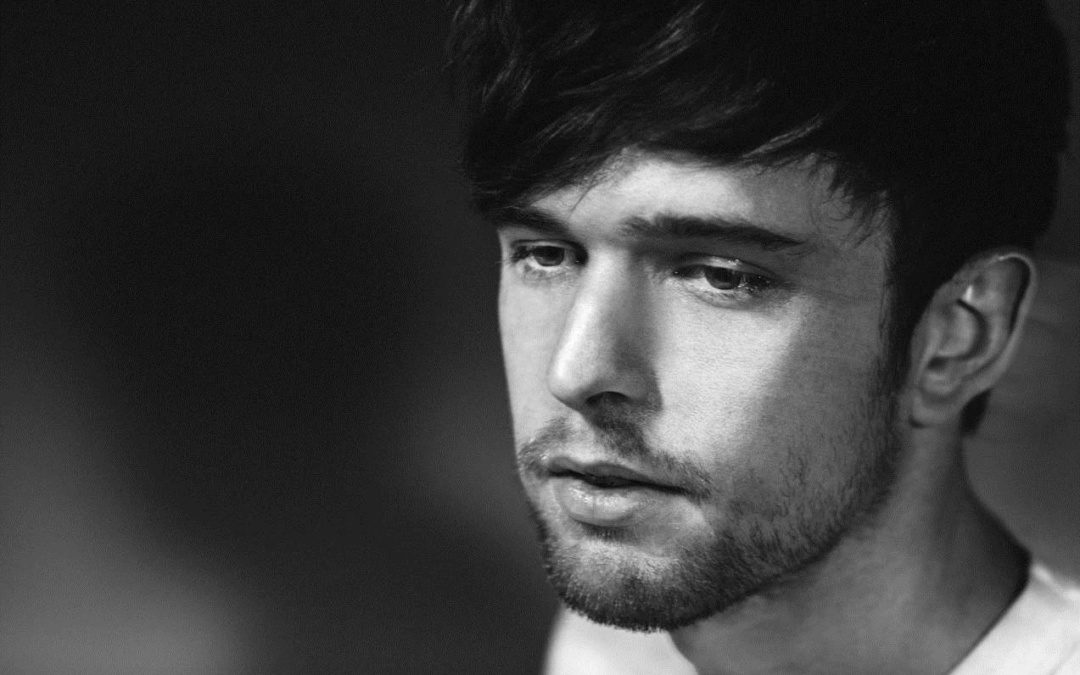