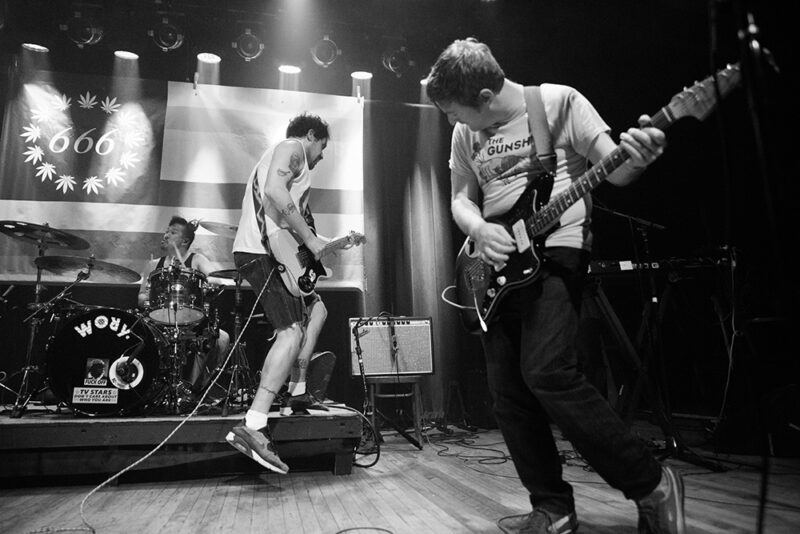 Jeff Rosenstock is a household name in the New York area, particularly in Brooklyn. Touring in support of his new record, POST—, he sold out his Warsaw date so fast that another needed to be added. In his thirties, Jeff has fans both older and younger. Teens crowded the front row, pressing their bodies against the barricade to be as close as possible. Their eyes were on the band as they set up, smiles slowly creeping up their faces and eyes widening.

Before the band made their official entrance, the Foo Fighters’ “The Best of You” boomed over the speakers with only one line on repeat: “the best.” The entire audience chorused those words at the top of their lungs, fists pumping, invisibly puncturing the air.

A Jeff Rosenstock show is like one collective headbang. The crowd sways and undulates back and forth like a wave with the force of fans crowdsurfing, jumping, pushing, and shoving. Beer dribbles down chins and over the mouths of metal cans in the midst of cheers while heads furiously nod to the beat, hair swinging like violent vines. Sweat beads across foreheads, bleeding down into soaked shirts. Rosenstock himself is a direct participant, a man of nonstop movement who spends more time in the air than he does with his feet planted on the ground.

The majority of the setlist consisted of both POST— and 2016’s WORRY. Every song was sung in unison, both band and crowd uniting in perfect harmony.

Towards the end, during “We Begged 2 Explode,” Rosenstock grabbed the mic and jumped into the pit, making his way down the front row where his youngest, most elated fans were located. He was not only singing to them, but with them. Their eyes sparkled while their grins shone in the light. They were hurriedly taking selfies and videos, excitedly waiting for Rosenstock to come to their particular spot.

At one point, Rosenstock suddenly disappeared. Everyone looked at each other in confusion. From the back of the crowd, there was a lot of noise and a brief clamor, causing the audience to turn around. Rosenstock had somehow gotten to the balcony in the very back of the venue by the front doors, saxophone in hand as he began to play. The crowd roared, and did so a few moments later, when Rosenstock jumped in and joined them, surfing on the weight of their hands.

Making his exit soon after, Rosenstock left the audience wanting more. That wasn’t a problem, however; many of them, as exhibited by a show of hands, were returning to see Rosenstock again the following night.