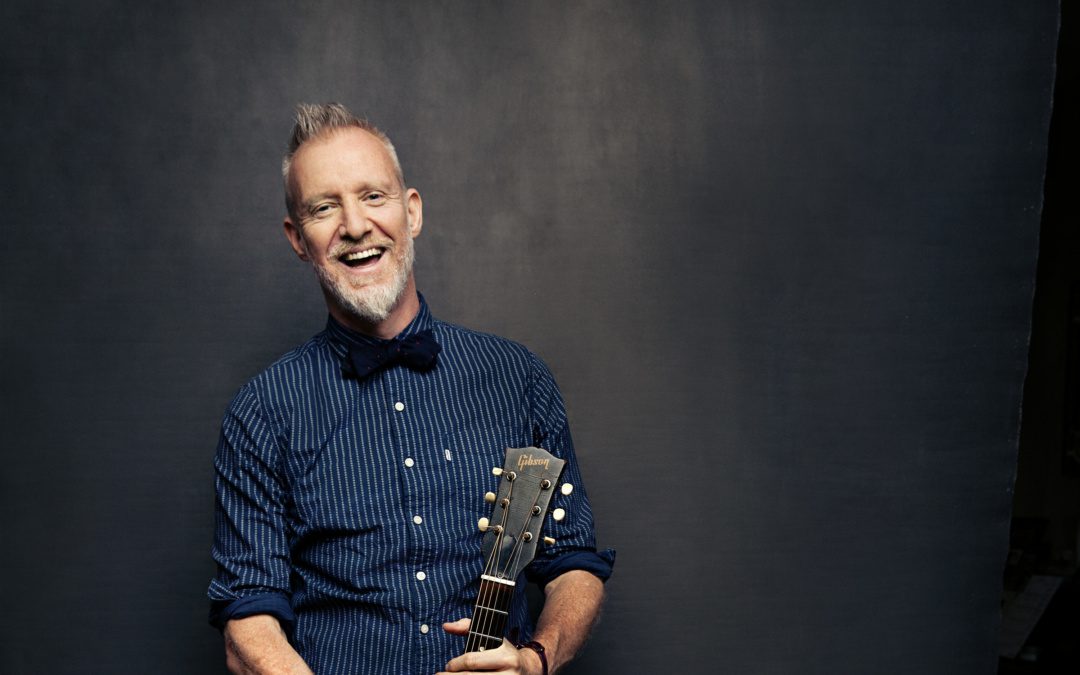 Chris Barron is one of the masterminds behind some of your favorite 90’s songs, as he is the lead singer of critically acclaimed four piece Spin Doctors. For years, he’s been honing his own solo sound alongside his work with the band, and has dabbled in working with other artists as well. He writes, plays, and goes about it all in a very unique, process-oriented way. In all reality, Chris Barron is the ideal musician in regards to talent, but he’s also a phenomenal and humble human being behind it all. We know, because we got the unique chance to ask him some questions in the thick of release week of his brand new album Angels And One-Armed Jugglers, which dropped on Friday.

Full to the brim of incredible artistry, Angels And One-Armed Jugglers travels into sound spaces and genres Barron isn’t necessarily known for, but pulls off entirely too well with the band he has assembled. Learn more about them – and Barron’s process – below, right after you check out the new album in its entirety!

I remember being very small, so small that I was about the same height as my parents stereo, holding myself up, my hand on the speaker, with Elton John’s “Crocodile Rock“ blasting out of it. I might’ve been in diapers. It made an impression on me because I still remember. It has to be one of my earliest memories.

When I was six years old, I saw Shirley Temple on our old Sony, black and white TV singing “The Good Ship Lollipop” and I was like, “I’m going to marry her and we are going to do that“. I didn’t know what “that” was. I didn’t know the difference between a singer, dancer, or an actor but I knew I wanted to perform. I always had a penchant for creative writing and when I learn some guitar, that evolved into song writing. I was also good at singing and my choir went to Europe to perform my sophomore year of high school. Being 16 years old, on tour in Europe just because I could sing galvanized forever my resolve to become a professional musician. I figured, if I could get myself across the ocean at 16 just because I could sing, I had a pretty good chance.

“Two Princes” was one of the first music videos I ever remember seeing, and I was ensnared by it every time it was on tv. How has your musical process changed and developed since then, both in your solo work and in collaborations? Is it much different?

I’ve always been very process oriented. When I write, I write in bulk, giving myself permission always to write the worst crap ever written. My thought is to get past the garbage and chatter to the creative part of my mind separating out the editing voice from the more instinctive creative voice. Later on in the process I rely heavily on the more analytical editing voice. As I’ve gotten older, I’ve tried to refine my process and allow myself more and more to believe in it. After having a big hit with “Two Princes”, for a long time, I was concerned with repeating the success of that song. That was a handicap. Ever since I’ve been working my way back towards writing the way I wrote when I was a kid, using the same technique I used, really, to write “Two Princes” in the first place, that is, following my nose and giving myself permission, writing tons of stuff and being willing to throw most of it away, keeping the 1 or 2% that’s good and refining that.

I realize now that “Two Princes” and “Little Miss Can’t Be Wrong” were not only two of the most integral songs in my young life – the lyricism really got me into music in the first place – but they’re also enhanced by the undeniable vocal talent. Your voice IS the 90’s to me, and many others. How does it feel, knowing you’ve kind of encapsulated an entire decade for many?

Ha. There’ll be no living with me… I just feel lucky that I wrote a couple tunes that resonated with a lot of people. I worked hard on those songs and I work hard on the skills that enabled me to write them. It’s gratifying to be a part of people’s lives just by virtue of doing what I love to do. There were a lot of great bands in the 90s so I’m glad we stand out amongst them.

That being said, we know you have struggled with vocal cord paralysis. (That had to be terrifying, and we aren’t trying to hit any nerves here.) Has that changed your creative process over the years? Do you have any advice for people who may be struggling with similar vocal issues?

Yeah. That was bad. I’m one of those people, for better or for worse, who identifies very heavily with their profession. Losing my voice was an existential crisis for me. When I first got my voice back, the first time I lost it, I was afraid, and I did some pretty lousy work afterwards, trying to write hit songs so that I would have financial security if I ever lost my voice again. Then I was like, “Screw this, I’m going to write the kooky weird stuff I’ve always written. I don’t care if it sells.” That’s when I really started to hit a stride, creatively. This latest time losing my voice really put a fire in my belly to make this new record. You never know when you’re gonna lose your voice, get hit by a bus, or be abducted by aliens.

Your new album Angels and One-Armed Jugglers is about to hit the airwaves. Tell us a little bit about the title, and what inspired you to go in what seems to be a more theatrical and robust direction with this work as a whole.

I wrote the song, “Angels And One-Armed Jugglers” On the steering wheel of my Crown Victoria Police Interceptor, doing about 60 miles an hour across the 59th St. Bridge. (Do not try this at home)(Or on the 59th St. Bridge) I was thinking about my elderly neighbor Adelaide, who lived next door to me in the late 20th century. The songs on this record are from a tremendous cachet of material. I’m pretty prolific and I always have stuff that won’t work for the Spin Doctors. Once I came up with the title, I just started picking songs that were thematic. The more theatrical production comes from Roman Kuhn who produced the record and was really the impetus behind the scope of the recordings. Initially, I wanted to make a scaled down, acoustic record. He had a much larger vision for the songs and I think he was right to frame them more expansively.

For this release, you sought out some of the best studio musicians you could find. What was that process like for you?

The first guy wanted to use was Shawn Pelton. I’ve known him a long time and work with him before. After working with Aaron Comess for such a long time, I’m a bit of a drummer snob. Then I saw Jesse Murphy the bass player doing a gig with aaron and they grooved so well together, I knew I could play with Jesse. It turns out that Roman recommended him for that gig. I’ve played with almost everybody on the record before and they really complemented my songs by bringing their best efforts to the studio. They all played so beautifully.

The title track has a melancholic feel to it and, thusly, is an interesting way to begin this body of work. But it’s got this bittersweet beauty to it when you dig into the meaning of it all. How do you imagine people enjoying this track?

Songs are funny. When you write them, they kind of get up and walk away. You don’t really get to decide how people interpret them or enjoy them. They’re kind of like kids that way.

You were quoted saying that, at least partially, “thematically, [the album] is about the cocktail party at the apocalypse, the decline of the American empire and just a bunch of lemmings in neck-ties going over the edge.” Did you find that a lot of this work may have been inspired by political events, or does it mostly evade that facet of our society?

Life and art in a democracy is inherently political. I don’t really set out to write politically, but songs like, “Still A Beautiful World” and “Raining Again” touch on a worldview. Just the act of reaching into peoples lives, seeking to make them happy, and creating freely is political.

“Darken My Door” is so intrinsically beautiful. What inspired that track, specifically?

Ha. Being mad at an ex. The old standby song theme.

The track “Still A Beautiful World” is so important. Its message, its lyrical content. It makes us wonder… do you have a favorite space that you like to retreat to to experience beauty?

Lately I’ve been practicing guitar on a stool in front of my building in New York City. It’s not a particularly beautiful place but people walking by, the dogs, the strollers, my neighbors, they all make a choreography with the light, the bricks, and the fire escapes. The experience of beauty, the experience of anything really, is internal. Who’s to say were not all just brains in vats and some mad scientist is making us see everything we see? Beautiful stuff is beautiful but ugly stuff can be beautiful too. And sad stuff…

We are under the very strong impression that each track on this album holds a lot of meaning for you. Is there a song that is a standout for you personally?

That’s true. In terms of meaning, probably “Still A Beautiful World”. That song touches on our existence as a species, religion, and I got really lucky with a couple of those lines… that’s a pretty nice riff too.

Do you find that you are drawn more to songs that mirror your previous work, or are you more into creating something completely out of the indie rock box right now?

Really, don’t think that way. For me a song is a proposition. Get to the heart of the proposition, answer all the questions in an artful way, and you’ve written the song. I try not to set out to write something specific before hand.

If you could be any superhero – previously existing or otherwise – who would you be?

I think writing songs and singing is a bit of a superpower. I don’t think I would choose to be anyone but me.

If Angels And One-Armed Jugglers was a meal, what type of food would it be comprised of?

There was this tiny Cuban restaurant on 14th St. and seventh Avenue called the Sucelt Coffee Shop. This would be a meal from there.

You have so much touring experience from over the years. Any fun memories?

Opening for the Stones was nice. That was like going to rock ‘n’ roll graduate school.

Do you have any outstanding opinions of the music industry now, as you’ve seen it pivot quite a bit during your time as a musician?

A lot of people are making records now. There’s just much more music out there. It’s so cheap to make a record that anyone can make one now. I’m not sure that’s the best thing for music.

Thanks!!!
___
Angels And One-Armed Jugglers is out now via Chrysanthemum Records. Keep up with Chris Barron here and remain in touch with all things Spin Doctors here.