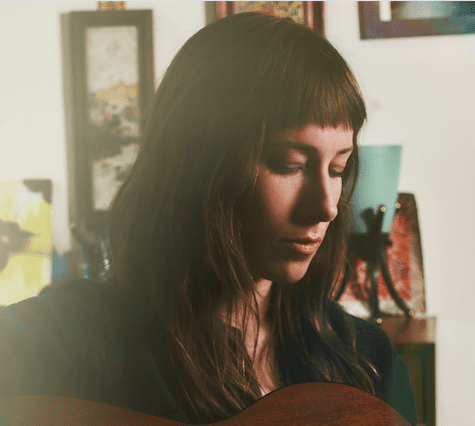 Today, Brooklyn-based folk musician Swimming Bell (Katie Schottland) releases her first solo EP, titled The Golden Heart. Over the course of five tracks, she takes us on an almost magical journey through beautifully picked guitars, slight sound effects, and light as a feather reverb to last for days. Quite frankly, it might be the best road trip ready EP we’ve heard all year, and we’re thinking about taking it on our next autumn excursion.

We’re so impressed with the work this lady has accomplished and by the beauty of her art that we wanted to ask her a few questions, to which she happily obliged. Below, find a quick interview in honor of the EP release.

There was always a lot of Beatles, Beach Boys, and Eagles played in my house. “Lucy in the Sky with Diamonds” sticks out in my mind. My mom in particular loved Peter Paul and Mary and used to sing it to us as kids. I think I get my love of harmonies from her. She’s the master harmonizer… a rap song comes on and she’ll find the major 3rd.

You have quite the resume with a host of other musical projects. With your own solo project, how difficult was it to find your own voice or to hone your sound? Is the process very different for you from working with a band?

I think in any musical project I’ve been a part of, that my voice has always been there, but the more chefs you add, the wider the flavor. With the solo venture, there wasn’t much conscious thought about a particular sound or voice. We took the songs at their essence and built on them. That’s my voice I guess. This process was very different than recording with a full band. It felt way more relaxed, and in turn more creative to me. There was no right or wrong to it. Just experimenting.

We know you recorded The Golden Heart in the London home studio of Oli Deakin, whom you met in NYC. How did you two meet, and how did the decision to fly to London to record come about?

How does anyone meet these days? I was training as a horse surgeon, and he used to be a professional jockey. He was new in town and we met through the classifieds of Equestrian Weekly. 😉 Then we discovered we both love music.

As for recording in London, it all seemed to fall into place. He was going back home to London for a few months and I had a window of time that lined up. We recorded in his parents house where he has a home studio set up. We just got to play and create for hours. For me it was a dream since I’d never been able to have that kind of freedom in recording before.

As we played the EP for the first time, we came to the conclusion that we’d like to listen to it lying on a blanket under the stars in the crisp, autumn air. How do you imagine people listening to/enjoying the EP?

What you just described sounds lovely to me. Can I come? I’m just happy if people listen to it, wherever they are. 🙂

What are you most excited about with this release?

I’m most excited to be sharing something that is very much from my own imagination, and learning to own it. To be less insecure about my lack of musical training. I started playing music about 3 years ago, so I’m new to all of it and it’s all very exciting to me.

You have a couple of dates coming up in California. How stoked are you to play the west coast, and – be honest – was it an excuse to get out to Joshua Tree for a little R&R?

I’m very excited to be playing in California. Should be fun! I have friends in all the towns I’m playing in, so it’ll be good to connect with people and play to a different kind of audience. I don’t think I’ll have much time to R&R in J-Tree, but I’ll be in Yosemite for a night and looking forward to that.

If you could collaborate with any artist or musician, who would it be and why?

I wish I could collaborate with Nick Drake, or at least let me sing some harmonies on his songs, but alas. 🙁 Living artists? Beck, Thom York, Sia, Neil Young, etc. Too many to name. I really love what Nicolas Vernhes does as a producer.

The Golden Heart is out today via Adventure Club Records. Keep up with Swimming Bell here.