panic! @ the disco re-inspires thousands during stop in kcmo 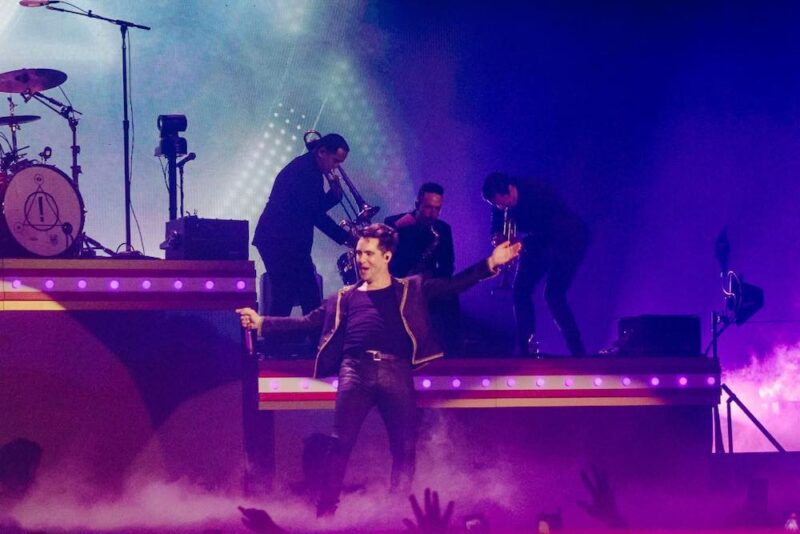 Who was a band or artist you played on repeat in your adolescence? Were you band or genre-loyal in your teens? Did you cling to lyrics, composition, or a specific type of energy to help inspire you and get you through the insanity of high school? Chances are, many millennials are getting into their feels thinking about emo and emo-adjacent music right now. A genre known for hosting nasally voices, lyrics that utilize a person’s entire vocabulary, titles that are longer than most novels, and theatrics that harkened a bit of darkness. While Panic! at The Disco absolutely belongs in this genre, lead singer (and now solo artist) Brendon Urie’s voice didn’t quite belong in the “nasally” category, as was the case for a handful of others who dominated the genre in the aughts.

2006 brought us “I Write Sins Not Tragedies,” an edgy track that immediately caught my attention, with a music video that utilized more stage makeup than a three-ring circus. In the words of Blades of Glory’s Chazz Michael Michaels, “it’s provocative.” Emo kids rejoiced as they saw themselves–their hair, at the very least–in the music videos and performances that ensued over the years from Panic. Even with the band’s evolution – from a band to a (mostly) solo act, with phenomenal cohorts, session musicians, and tour players, and as they’ve dipped their toes into different genres and sounds – their fanbase has held strong.

February of 2019 was the last time Urie made an appearance in the Kansas City metropolitan area. Aside from a less crowded atmosphere on the evening of September 13th, the crowd was no less invigorated and was loud enough to cause a visceral reaction from the entertainer multiple times. He looked shocked, he noted that he was impressed, and the pure joy on his face could be felt all the way “in the back back back back.”

Panic! at The Disco has always done its best to incorporate a wide range of tracks from various titles in every single one of their shows. While the Viva Las Vengeance tour was pretty meticulously planned – from pyrotechnics to sound effects, lighting and confetti – there is still wiggle room for a variety of songs to be interspersed depending on the date. Our stop seemed particularly magical, as the crowd sang along to the following tracks.

The tour itself – as high energy and incredible as the performance has been – has experienced some setbacks over the first few weeks. As most may know by now, two dates were postponed because of Covid, and the night after they were in Kansas City, there was a small fire incident on stage in Minnesota. And still, Brendon moves on with the energy and enthusiasm that we have come to know and love him for.

Check out some highlights below, and make sure to check out Panic on their North American tour through October, and then in the UK at the top of 2023.