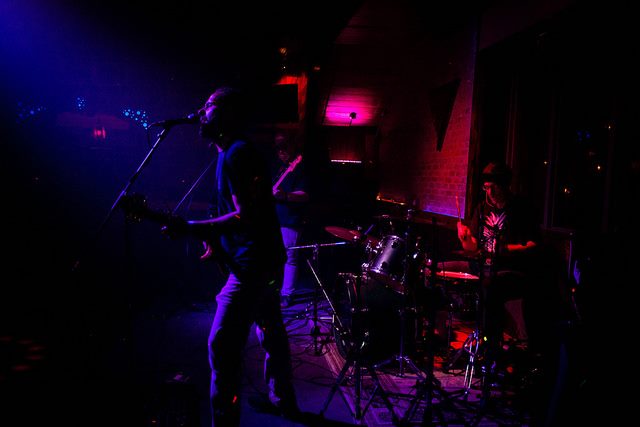 Punk folk outfit Mike Llerena & The Nerve recently released an album titled Old Haunts & New Horizons, and we haven’t been this thrilled in a hot second. First of all, the unique blend of genres is incredibly striking. Second of all, the journey they take you on over the length of ten tracks is indescribable, and absolutely perfect for a summertime release. Take a listen to it below, then read on for our short, fun interview with Mr. Llerena himself!

I think my first musical memory would be hearing The Beatles in my house as a little kid. My first concert was actually seeing Paul McCartney solo when I was about 10 (setting the bar high!), but before then I had been hearing those songs for as long as I can remember. Like a lot of musicians, The Beatles have remained a fixture in my music library and their influence permeates my approach to songwriting and arrangement, even if I don’t always realize it.

I know you’re from Gainesville… do you think being from Florida has helped shape your sound, or do you think you’d be playing the same type of music had you originated elsewhere?

While I certainly have a lot of influences that aren’t specific to Florida, growing up here certainly played a role in me discovering and embracing certain bands. If I hadn’t moved to Gainesville and played music for years here, I would probably still like Against Me!, Hot Water Music and Tom Petty, but living here definitely makes you feel more of a kinship with those bands and artists.

Your upbeat single “Crossfire” was a great intro to the new album. What inspired it, specifically?

“Crossfire” had actually started off as a slower, acoustic song (with harmonica parts on it nonetheless) before I adapted it to the faster, louder full band version that we play now. The lyrics of the song deal with the anxiety of feeling caught between two opposing sides in an argument, going through various stages of identifying with one side’s argument over another and trying to find your own place in that conversation. Whether you’re dealing with this on a more personal level or observing it in the current state of political discourse in the U.S., the lyrics of the song can apply to different situations.

What was the production process like on Old Haunts & New Horizons? Any fun anecdotes?

We spent about a year recording the album. During that time, we formed the band, played shows in and out of Gainesville, kept recording in the studio, and lived our day to day lives outside of the band. Our engineer Jared Pennock (Z-Chord Studios) co-produced the album with me. He also co-produced and engineered my last two solo EPs as well. Working with him a third time was great because we have a sort of established shorthand with each other after recording together for so long. A lot of cool things can come out of working with someone you’re comfortable with in the studio: the spoken word intro on “Last Words”, the tape machine intro on “The Catharsis”, ideas like that are facilitated in that type of environment and it makes for great moments on the record.

Above all else, I just hope people like the album. Being on the other side of the process, I feel like each listener can and probably will feel different things after listening to it. The album may mean one thing to me, but it may mean something else entirely to a listener. I wrote the album and sequenced it in a way so that the songs tell somewhat of a story from start to finish. It’s a loose narrative, but at its core, I think it’s about a young adult reflecting on where they’ve been been, where they are now, where they’re going, and how all three of those things are connected. The bittersweet nature of nostalgia is a prevalent theme on the album as well.

I’m always writing songs. In some ways, writing songs on a regular basis has helped me document the last few years of my life. A lot of musicians say this, but songs and albums are like snapshots in a way, windows into significant moments in your life that you can reflect on long after they’ve passed. For me, writing songs is like a necessity that needs to be fulfilled, like having enough oxygen. Whether I become successful playing music or not, I’ll always write songs in some capacity. It’s something that I love doing.

While Batman is my favorite superhero, I would have to pick Spider-Man just so that I could experience swinging from building to building several stories above the ground. Exercise is important and web-swinging sounds a lot more fun than running on a treadmill.

Keep up with Mike Llerena & The Nerve here.