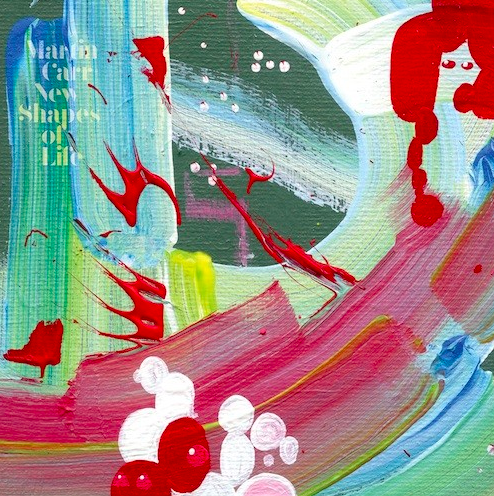 Alluring Cardiff-based pop musician Martin Carr released his latest record, an elaborate 8 track journey for the tympanic membrane titled New Shapes of Life, at the end of October. Thrown into the album with its title track, we begin at a casual mid-tempo clip, vocals delivered with ethereal grace, not unlike we would experience from Sting or Thom Yorke. While not exactly preparing for the second track like it should, it sets a good sound quality standard for the album at large. “Damocles” has more of a vocal-induced gloss of mystery over it, while “The Main Man” slows everything down exponentially into more of a trance atmosphere. By “Future Reflections”, our heart rates have slowed down to better appreciate the crawling clip that this song proceeds at. With small hints of The Beatles and futuristic influences, this song flows “like water” through the speakers.

Fifth track “A Mess of Everything” has more of a melancholic feel to the vocals, but does progressively bring the tempo – and, simultaneously, mood – up a big to properly prep us for “Three Studies of the Male Back”. This track was made for a stadium tour or the headlining slot at a music festival. (Wink wink, nudge nudge.) It’s an atmospheric marvel, one which we don’t necessarily exit completely when the song ends. Seventh song “The Van” has an otherworldly, floating feeling to it, as it exists at a much slower tempo, in almost “crooning lounge singer” territory. And the big band feel to it just magnifies the ambiance. “The Last Song” is – hilariously – the last one on New Shapes of Life, and perhaps the most rewarding. The natural sound effects, lush instrumentals, and introspective lyrics almost leave a cliff hanger at the end of it all, positioned just like your favorite soap opera to cause anxiety until we hear the next batch of music from Carr.

But we will, instead, press “play” again and keep tabs on Carr here.