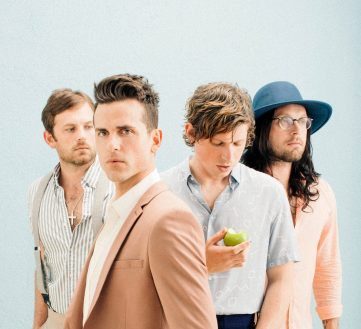 The notorious rock collective Kings of Leon dropped their new album Walls last fall. Being a massive fan of the band myself, I needed help getting more objective opinions on the piece. So, in the dimly lit dining room of my parents’ house after a dinner of fried chicken, my immediate family (and grandmother) sat down to add our two cents about the work. (This is one of my favorite posts from my Impose days.)

The first track of the album, “Waste a Moment”, allows swirling guitar to bring in a good little melody. It’s the uptempo single you may have heard on the radio, lending itself to the typical sound Kings of Leon is known for. But after that first track, the band seems to have attempted to deviate from their norm, nabbing bits and pieces from different genres to make the album into a diverse, warm body of tracks to feast your ears on. For example, when second track “Reverend” begins, you immediately notice the vintage 70’s feel to the keys, a mid-tempo track that starts slower as lead singer Caleb Followill reaches for octaves we didn’t realize were in his range, providing a hazy, more ethereal sound to his vocals during entire stretches of the song.

While “Around the World” may begin with a lightweight guitar riff, there is a solo that is borderline earth shattering awaiting your ears. It definitely makes us want to pack our bags and escape to a place unknown. “Find Me” comes in deeper, and gets straight to the point. 44 seconds in, Caleb starts to sing and the song loses some of its momentum by reducing the instrumentals for his vocals. The song gives off the impression that he is singing while he’s driving a car, and the momentum picks back up during the chorus. “Over” has a darker feel to it with the deep, consistent guitar riff. Sounds like The Killersblended with some David Bowie, something my entire family picked up on. (I will note that my grandma claimed it had a Phantom of the Opera feel to it.) We all agreed that Caleb’s vocals sound blatantly different on this track, although no less beautiful.

The song “Muchacho” proves the notion that when you add castanets to a song, it automatically becomes more vibey. Slightly reminiscent of some of our favorite R.E.M. tracks, Caleb’s voice is delivered at an even deeper range, if that’s possible. It’s slower, with a very tropical disposition and a tempo that reminds us of Bruce Springsteen‘s “Brilliant Disguise”. (Which was a brilliant move on their part.) Percussion leads in to “Conversation Piece” slowly, with lyrics like “take me back to california, to those crystal neon signs” allowing the listener to reminisce on days past. The song is low key, like the majority of the album, and could easily be played in the background of a back road drive with your significant other during the autumn months.

“Eyes On You” brings the tempo back up, the instrumentals noticeably reminiscent of some of our favorite Weezer tracks. The song deviates to a punk spectrum, although the way the melody is composed is actually very beautiful and works perfectly with Caleb’s scratchy bravado. “Wild” brings the album back to a warmer instrumental composition, and we’re led to a place of relaxation. The album rounds out with its title track, which sets in at a glacial – but incredible gorgeous – pace. Simple instrumentals allow the vocals to be highlighted moreso than its predecessors. Lyrics like “I can’t get there on my own / You can’t leave me here alone / I’m just trying to do what’s right / A man ain’t a man unless he’s fought the fight” make this a very introspective and personal piece. It’s a delicate way to end the album, and slows your heart rate down immensely. “Walls” can be summed up as an existential piece that leaves you questioning life, love, and your own pursuit of happiness.

As you may have noted, our evening included quite the roundtable discussion. As fleeting as it was, we all maintained the opinion that the album is experimentation at its finest.

**This review was written with the help of:
Elizabeth & Stephen Schneider
Patricia Streng
Erin & Tim Zimmerman