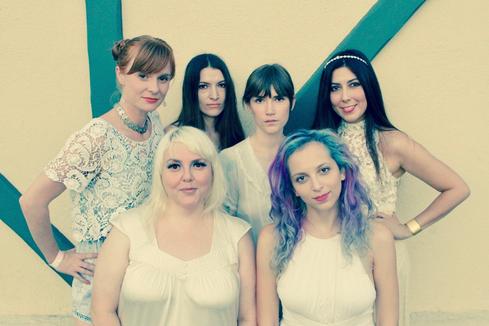 Pop group Honey Child is releasing their self-titled ninth album on, you guessed it, February 9th. Honey Child was created by Claire McKeown and features Claire Boutelle, Aimee Jacobs, Danielle Mandell, Dayna Richards, Jacquelyn Sky, and Cynthia Zitter. Each of the ladies in the all female group was hands-on in the production process, making this an album of strength in its design.

The album consists of nine songs and clocks in at 28 minutes in total. One of the songs from the album is titled “Run With Me”, which is the first single released from their album. “Run With Me” is a fascinating song that will transport you to a different world. It is about people that have had enough of materialistic things in the world. The people that are fed up decide to run away to another part of the earth, such as the river. The beat from “Run With Me” is very captivating, the singers basically “steal away” from the world.

Another song from the album is “She Calls His Name”. The beat and the melody mesh seamlessly together. The ladies’ voices blend well together, creating a fascinating affect on the listener. The song is like a mix of classical music – meets a little pop – that will leave you wanting more.

Other songs from the album include “Standing in The Shadows”, “Gotta Wait Another Night”, “I See Other Sides”, “Sorrows Arms”, and “Our Last Goodbye”.

Keep up with Honey Child here.