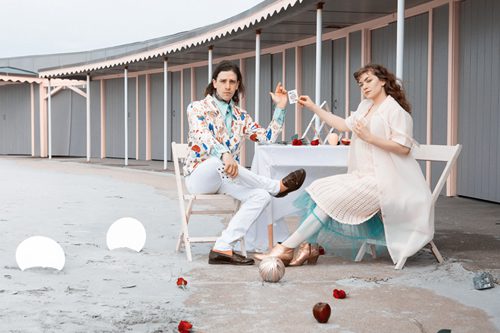 Musical duo Leslie Schott and Andrew Valenti of Holy Golden take you across the coastline in their new music video for their song “Arrival”. The duo met during a lunar eclipse on the island of Martha’s Vineyard. From there, they connected through music, thus forming Holy Golden. “Arrival” is the latest single from Holy Golden following their 2017 release The Licking River EP, which was well received amongst listeners.

Schott’s breathtaking vocals take over the track on “Arrival”. The music video starts out with the couple sailing in a rowboat on the coastline. The duo roams around the beach, reading stores, sharing bread and long gazes between one another. The video is fairly entertaining. They then have a romantic date on the beach that later takes an interesting turn.

The mood goes from being romantic to adventurous as the couple comes across a map with instructions. The video gives off positive vibes from the moment it begins, a mixture of romance and mystery of what the map entails.

“Arrival” is one of the latest songs from Holy Golden’s upcoming album Otherworld, which is available February 16th. Keep up with the act here.