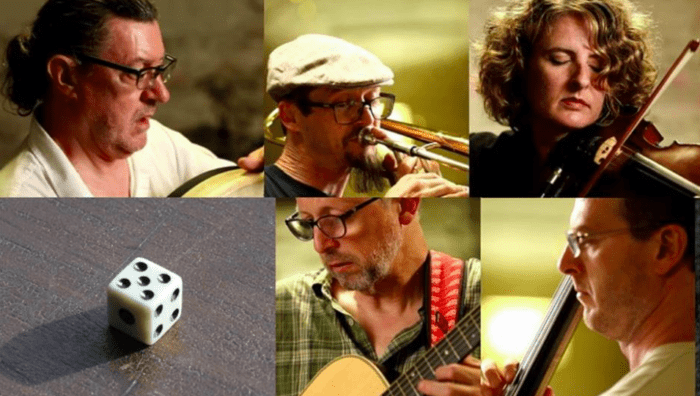 New York-based art rock collective Heroes of Toolik – comprised of Arad Evans (guitar), Jennifer Coates (violin), Moppa Elliott (bass), John Speck (trombone), and Michael Evans (percussion) – has chosen to take the band in a different direction from their previous two album releases. Not only did they add Elliott and Evans to the lineup, but they’ve also added a noticeably more experimental layer to their work that both captivates and encourages the listener. They’ve really brought that to light with a short film they recently released of a studio performance as the official video for their track “Quincunx”.

The word “quincunx” translates to “an arrangement of five things,” so they take that meaning in the most literal sense just being a band together. The band and the word are simple, yet intrinsically complex. The video itself mirrors this concept, as it is a relatively simple live performance but is built of its own instrumental complexities. Bathed in warm light in the heart of summer – June 22nd, 2017, to be exact – Heroes of Toolik find their groove together in a way that just insists on provoking an ambiance. And it’s absolutely beautiful.

Keep up with Heroes of Toolik here.