griffin robillard, cracks in the ceiling 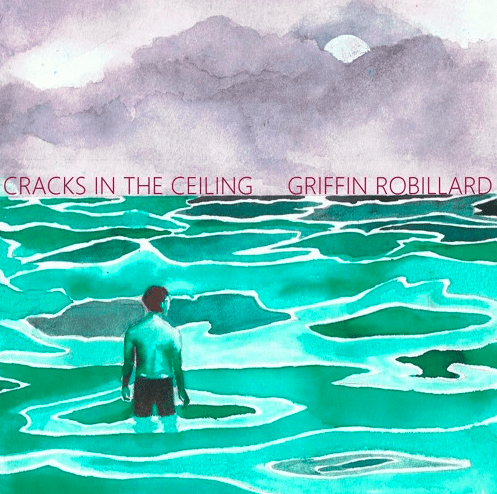 In September, Boston’s folk/indie rock talent Griffin Robillard released his 9 track, full-length album titled Cracks in the Ceiling. Flooded in a sharply nostalgic feeling, the album itself was written while Robillard was living in Copenhagen. You can almost feel the growth he was experiencing while writing the piece, as his vocals are flooded with emotion as he brings you into his world with the mid-tempo, almost anthemic, title track, bouncing into the more upbeat and soulful vibes of “Ghost” before getting slightly more twangy, then bluesy/jazzy, in his instrumentals with third track “Because I’ve Told You”.

“Reel to Reel” slows things down – has the structure of a Ben Folds-type track – weaving a narrative speaking to his significant other that is slightly specific, but still very vague, perhaps for the sake of universality. While “Artifacts” picks things back up exponentially, it is with sixth track “Faithless” that we are brought back out of our seats, encouraged by the sound to move. “In Your Own Way” houses similar surf pop vibes to the instrumentals in Gin Blossoms’ “Found Out About You“, causing us a few moments of reminiscing on our 90s selves.

It is with “Nothing to Show” that things get very serious, both lyrically and instrumentally. It’s like Robillard has decided to rip his heart wide open in this one, simplifying the instrumentals slightly to really showcase the words as he croons the track into a 70s style rock stunner. “Tired of Being Cruel” is your last taste of Cracks in the Ceiling, a  lot more upbeat in its composition, though melancholic lyrically as he begins the song with the line “tired of being cruel to you.” Self reflective, honest, raw. That’s what we’ve come to love about Robillard, and – while we’re plenty happy with this release – we’re already excited to hear what comes next from this talented musician.

Cracks in the Ceiling is out now. Keep up with Griffin Robillard here.