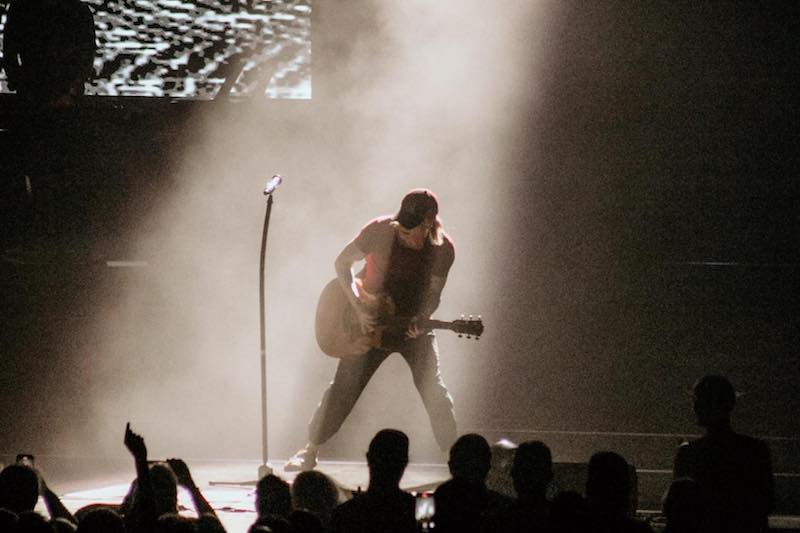 On a mid-summer night at the beginning August of 2022, The Goo Goo Dolls took the stage to an (almost) sold-out crowd at Starlight Theatre in Kansas City, Missouri. A show that had been postponed from a previously scheduled date, there was heightened energy around the event.

The Goo Goo Dolls riveted the audience with a 23-song setlist. They brought the heat starting with the first lines of opener “Yeah, I Like You,” an effervescent track from this year’s self-reflective Chaos in Bloom. Along with their new work, they played the audience through a multitude of hits and favorites. “Slide,” “Here Is Gone,” “Black Balloon,” and “Lucky Star” were all performed within the first ten songs. And there was no room for slowing down there.

Bassist/vocalist Robby Takac brought his quintessential “ball of fun” energy to the stage all night long–this time around, notably wearing shoes, which isn’t necessarily his MO–dazzling the crowd with some deep-cut tracks in moments you can only classify as magic. As many post-pandemic shows have gone along to prove, The Goo Goo Dolls’ influence spans generations, as people of all ages and demographics came out to enjoy the show despite the blistering midwest heat. (I wore a neck fan I borrowed from my parents, and have no shame around that fact.)

As someone who has had the honor of seeing this storied band perform live multiple times during their time in the limelight, I can firmly say that their performance felt different this time around. Though there were kaleidoscope lighting features and the same level of excitement coming from the band members as in previous shows, there was an extra layer of sheer joy emanating from the stage. You could sense Johnny Rzeznik’s (guitarist, vocalist) weightlessness as he beamed at the audience, appreciating the moment much more, perhaps, than anyone could have pre-pandemic.

If you stayed through to the end, you had the benefit of singing along to “Name,” “Broadway,” “Iris,” and more, and may have even had the privilege of singing along to a beautiful, showstopping cover of Petty‘s “Runnin’ Down a Dream.” It felt like glitter was falling over the crowd if you took the chance to gaze up at the starry night sky at that moment.

Until you remembered that, with the end of the show comes the end of the beautiful distraction. And you’re actually outside. Sweating from every pore. And the band is gone.

But–if you’re one of the lucky few–the black balloons that were passed around the audience might not be gone. (And we treasure a show souvenir.)