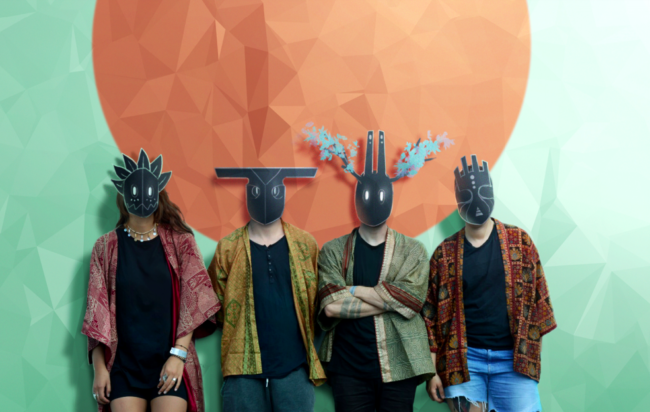 It’s often said that music is a universal language, but even so it’s rare to see a group that represents that so literally. Progressive-indie electronic group Me & the Monster all came together when they met at their shared university in Berlin, but they possess an additional layer that sets them apart from the typical cliche of starting a band in college; the 4 musicians all hail from different countries.

While most bands start off arguing about when they’re going to rehearse or who’s going to bring snacks, this group had to immediately face an obstacle that most would never even consider; figuring out how to deal with the cultural and linguistic differences that existed as a result of their varied backgrounds. But luckily, they all had one overwhelmingly important thing in common that transcended these barriers: their love and appreciation for music. Their self-titled EP, dropping January 31st, 2020, is the group’s debut.

The influences of their different homelands come through in their music, and the result is a beautiful melting pot of sounds and ideas. A range of modern influences can be heard in The Monster’s music; Of Monsters and Men seem to show on their indie folk-rock side and Alt-J in their experimental sounds and concepts. The progressive debut EP touches on political issues such as the rapidly-changing coral reefs and the controversial political scenes in the hometowns of some of the band members. Their debut is representative of who the group is and what they stand for, and everything about them supports this; even the name Me & the Monster itself is a take on describing “modern man and his connection to the most original part of himself, the subconscious: his monster.”

The opening track, “My House”, is an introduction into the Monsters’ world, and they waste no time in welcoming their listeners into their melting pot of music. Hearty tribal drums and soulful vocals immediately draw you in; “Greetings / This is the jungle of my feelings” sings vocalist Andrea Trujillo. Here, home exists not as a place but as an idea, as a feeling, and as the people that become home for you when you leave the place you’ve always known. The opening track is the perfect intro to the group, who are all familiar with this concept as they hail from Spain, Venezuela, and Italy and all found unity and this idea of home through their common love for music.

“The Shadow” touches on the concept that the group is named for; the idea of recognizing the monster inside of yourself and the battle that everyone goes through with that. Meanwhile “Give Me Fire” stresses the importance of finding a source of light to keep you fighting through dark times. “Here” is a brightly-colored river of sounds that winds slowly before building into an explosive chorus heavy with tribal drums and echoing harmonies. The passionate political anthem introduces a sense of urgency as the group makes a call to action; “We cannot pretend / That this isn’t real / This is not the end”.

The closer, “Colours” touches on the issue of the damage of the coral reefs as a result of climate change. “It’s in my body / It’s in my bones / I must keep fighting,” Trujillo repeats, her passion for the cause evident in her moving and soulful voice. Smoothly rolling guitar riffs reminiscent of the ocean waves themselves accent the anthemic chorus. Shouting background vocals call for unity as the group reminds listeners of the importance of using music as a channel for activism for important causes.

The debut is a rare case that leaves listeners not only with a crystal clear idea of where the group stands musically, but also politically. While each track shows off a varied side of who the Monsters are and what they’re all about, the EP has a strong feeling of unity and coherence that makes the group’s debut body of work feel strong and memorable.

Keep up with Me & the Monster here.