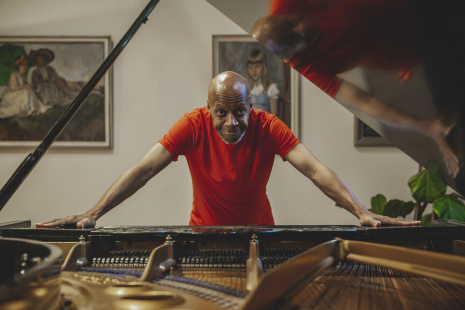 Laraaji is cracking open a new chapter in his music with his latest project Sun Piano. The twelve-track album reveals a whole new side to his sound for longtime listeners. From an early age, he had been playing music originally imitating his favorite piano players, such as Fats Domino or Oscar Peterson. Since the late 1970s, Laraaji has been a loved cult-icon based in New York City This is just another chapter in his story, so take a deep dive into Sun Piano.

Sun Piano begins calm, easing you into the album. “Hold On To The Vision” is soft and beautifully composed, the perfect track to play in the morning while you get ready for your day. Throughout the album, Laraaji picks up speed on tracks like “Shenandoah” and “Moods & Emotions”, with various tempos and style. “Moods & Emotions” stands out the most among the others. Through the notes of hard hitting keys, there definitely are tons of moods and emotions on this track. “Resonance” is almost six minutes long, weaving in and out of different keys and showing a range of emotions. The sound, especially on this track, is very rich and doesn’t even come close to falling flat. Closing out with “Embracing Timeless” wraps everything up and returns to a familiar calming sound introduced in the beginning. The uplifting are sure to soothe your soul.

His instrumental accomplishments are unmatched and show the craft has evolved, growing stronger with every release. Listening to this album is sure to put you in a relaxing mood and you can truly appreciate Laraaji’s talent. The rhythm and varying textures is a skill that he has perfected since the 80s. This is the first release in a trilogy all tracked at the same session. The companion LP, Moon Piano, will follow sometime later in 2020.

Keep up with Laraaji here.