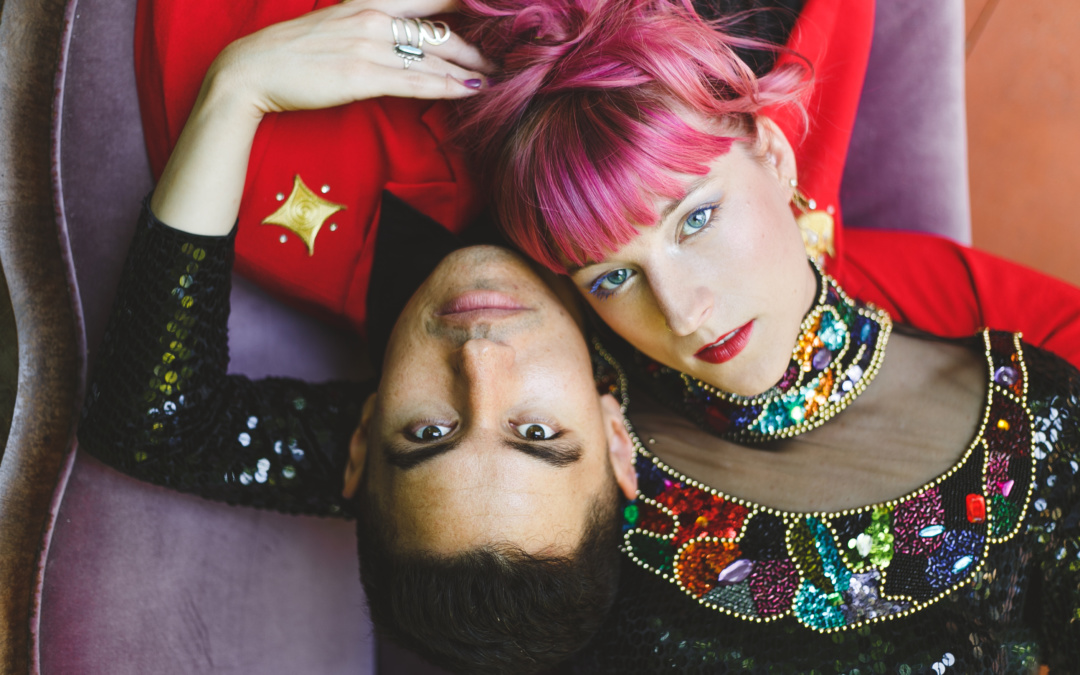 Expands KiSMiT on the track:

No human escapes desire and its open endlessness. “Look No Further” is about trusting that there is an infinite well of love within one relationship. As we come to our 6 years of loving one another, the subtle has only become more sublime, the depths we’ve experienced together have been beyond what we could have imagined, like a fine wine only getting better with time.

With the state of the world and all of the violence and horror we are constantly reminded of, we just want to put more love out there.

Just in time for Valentine’s Day, we’ve got your exclusive premiere right here.

Keep up with KiSMiT here. 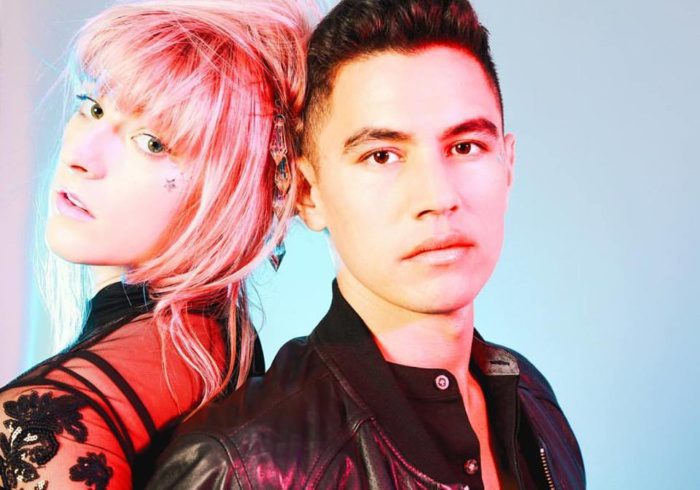 KiSMiT delves into the sonic experience of “cosmic love”

Los Angeles-based indie pop duo (and real life couple) KiSMiT – Carly Barnette and Basti Reunert – has been blowing minds with their latest release, a 70s-inspired track titled “Cosmic Love”. So you know “we struck gold” with the music video for the track, which also plays off the nostalgic nature of the song. Carly and Basti spend the majority of the video making eyes at each other, frolicking in the desert in vintage-inspired outfits, layered in with shots of the two playing the song as if on a variety show. But whether they’re covered in glitter and seemingly glowing, transposed over images of the universe, or dancing around outside, these two are encouraging positive, fun, adventurous love with this video.

We were in such a good mood after watching the video that we decided to ask the duo a couple of questions about it all. So check out the video below, and then learn more about your new favorite power couple!

Carly: Definitely Jewel’s ‘Pieces of You’ – I knew all the words at 5 years old. My mom (going through a divorce at the time – shocker there!) had it on repeat in the car growing up. Something about her raw emotions just touched my little baby soul – #everydayangel (her super fan hashtag in case you didn’t know) ’til I croak. The album followed me throughout my life – first concert, first one I played at the piano – I look forward to the day I can look her in the eyes and thank her for her imprint on my life.

Baz: First album or song ever is a tough one to remember. The first song that I remember really catching me is ‘Hotel California’. It is a saga of a song not to mention the EPICALLY MELODIC GUITAR SOLOS!! My great uncle Freddy showed it to me on our drive from Palmdale to Santa Barbara, which, at 8 years old, was an epic journey of its own.

Your new video for “Cosmic Love” is so fun, and it has such a beautiful warmth to it! Where did the concept come from, and what was filming like?

Carly: Thank you! We had so much damn fun making it – I’m thrilled that that comes through. It’s our first music video so it was a labor of love from start to finish. I’ve always dreamed of doing a music video and to have been able to make it happen with some of my favorite people was just beyond magical. I had the idea for the lyric “we wax and we wane – I just want more of the same” and thought of us sleeping – how we might start spooning but then roll over onto our backs or snuggle the other way and it fascinated me from a birds eye view that it mirrors the moon cycle.

As “Cosmic Love” came to life musically that idea always lingered at the back of my mind. All of the music video brainstorming happened with Alex Cantatore (www.quickactcasual.com), our director / dear friend / upstairs neighbor at the time. We would lounge around in our apartments or chill out in the backyard and shoot ideas across at one another. Nothing was too big or crazy or extravagant and that was exhilarating!

Baz: Having alien-planet-looking parts of California (Mono Lake, Red Rock Canyon, Death Valley) as such a blessing for our outer space ambitions on a shoe-string budget.

Carly: Two worlds started to form: Our “SuperStar-Selves” (the best parts of our love: sexy, confident, fabulous); & Pleasant-ville meets desert – Desertville (the day-to-day, mundane and less flattering but very real flip side to a loving relationship). This first music video presented an opportunity to share another side of us. We wanted to be as honest as possible with the partnership we are putting on display – it’s magic and muddy all wrapped up into a a beautiful mess.

What inspired the track itself, if we might ask?

Baz: Sonically, it comes about from a mixture of sounds inspired by Allen Stone’s Freedom (Alternate Version), Andra Day’s Mistakes and Daft Punk’s Get Lucky. (Pharrell, if you’re reading this, you better not come after our money! We didn’t steal your song!) Lyrically, ‘Cosmic Love’ is derived from us wanting to remember that the day-to-day of loving and working together has many twists and turns, warm and cold moments and all of it is part of the ride.

Carly: We wanted to make something that was bursting with love and vitality from the first beat, that, most importantly, made me move. If my booty is shaking, there’s definitely a smile on my face and that was important with this new direction of our music.

How do you imagine people listening to this track? (In an armchair, surrounded by flowers in a meadow? In an airplane with cotton candy clouds? Sitting at a BBQ? You can get creative here if you want!)

Baz: I picture people who are on the move listening to the song: in their car, getting ready to go out, exercising.

Carly: Such a fun question – I hope people are listening to it while they are making dinner – bottle of wine open, dancing in the kitchen -that sort of vibe. Also, before you’re going out – a social, pump-up vibe would make me reaaaaally excited. I know my grammy listens to it on repeat while she drives – so in the car for sure (#sola) okay okay subway too!!!

Any pet peeves or interesting stories you’d like to shed light on about each other? (We want all your secrets!)

Carly: Oh DANG – first time we’ve been asked to spill the dirt! After 5 years of living and loving together, I think I can divulge just one…. homeboy sleeps with earplugs (such sensitive angel earbuds) and when I wake up in the morning, they are always near me, around me, on me, without fail like stickers on my body – really haven’t vented about this, thanks for letting me get it out. Baz, you’ve got to work on that situation. But, if that’s the top of the list of annoyances, I would say,”Hell yeah! I’m a lucky gal.” Interesting story about Baz, that his modest South African self would never share and one that continually blows my mind, is that he picked up the guitar with serious interest and investment at 16. Like whaaaaaaat!?! I am so inspired by his dedication to his passion. He is always down in the studio in soft pants slapping da bass or producing or findling on the guitar and that is something I admire so much!

Baz: Well, I’m beaten for age by Carly’s flawless performance as Annie, with a 101 degree fever, at age 9. Her gran sent us the DVD of the performance and the sparkle has always been there. (Car, while you are sleeping tonight I will be sure to rest the earbuds on your eyelids.)

What’s your opinion on the modern music industry?

Baz: It is constantly evolving, especially how people are digesting music. The ability that everyone has to get their music heard and to find their audience is unprecedented. The niche markets are able support more indie artists than ever before. The major challenge is, of course, in that music streaming has greatly halted the flow of money to the artists, but when there is change in the weather, you best adapt and get on with it, the world isn’t going to stop for you. Again I’ll say, the major pro of the modern day music industry is how easy it is to connect with people of similar taste around the world.

Carly: Yeah, I will second the positive wind in our sails. It’s daunting to be investing in a career where the return isn’t guaranteed. So much of the conversation is the same “no money in music”, which I understand that that’s the truth but my mom started her own business when she was pregnant with me (talk about inspiration) and has always preached that when you are doing what you are meant to be doing, support always comes, I really believe that. I think in a lot of way it’s a super empowering time to be in this industry – no more waiting around for someone to find you or holding your breath for luck. Do the work, get your music & content as proud of it as you possibly can be, get it out there and what is meant to be will be.

However black & white as the social media “highlights reel” may seem sometimes – I think we are also getting to a point where if you are fake, it comes through. As an artist, there’s no hiding behind an image because daily you are sharing what you ate for breakfast, how you feel, who and what you support. It’s overwhelming and I need to unplug on the regular but I don’t think we even know what we are living through yet!

On an emotional level – our country, world, humankind is hurting right now, every day we put on our armor to the outside world that feels like it’s falling apart and to be contributing music as a soundtrack through these scary times, is something I am so grateful for.

We have a new single ‘Panther’ coming out later this month – the second release off of our upcoming EP coming out next February as well as an upcoming show at Harvard & Stone in Los Angeles on November 21st at 10pm. Thanks so much for taking the time & interest to share our story!

Keep your eyes peeled for “Panther” and updates on KiSMiT here.