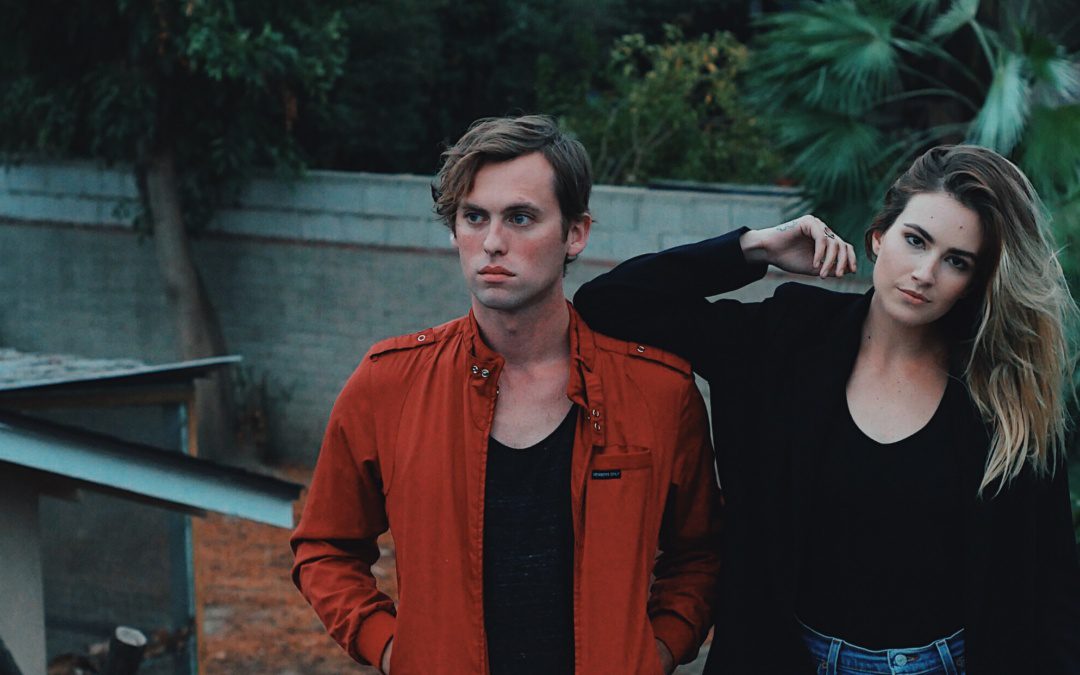 Los Angeles based pop duo ALKE – comprised of Jameson Flood and Audrey (A.K.) Karrasch – maintain the perfect balance of ethereal vocals and nostalgic, 80’s instrumentals in their art, music that makes you want to get up and make all of your teenage dreams come through. Theirs has been an inspirational journey, and A.K. has shared her insight with Bitch Media and Girl Talk HQ in recent months, highlighting emotional abuse’s place in the music industry. It’s a side of the industry that consumers don’t normally get to see, and it’s a terrifying reality for many.

But then there are the few that rise above. They create organic, intense emotion with their art and they climb to the top with their ability to rise above with a feel good/do good attitude. ALKE is one of the few, and you will feel that way time and time again, whether enjoying one of their refreshing singles or some of the gleaming words of wisdom they provide.

We wanted to dive a little deeper with ALKE. So, we did.

If you were to introduce ALKE to the world in a major way – really go all out, the sky’s the limit – how would you do so?

Jameson: Just to preface this answer I’ll let you know that this is Jameson answering this one (I don’t want my bitterness to be associated with A.k). So, I thought about this question a lot and finally had a moment of realization. I don’t know if anything, fantastical or not could do a sufficient job of introducing our music to anyone. What we want more than anything is for people to appreciate what we create and maybe spend a few moments in our world. We give people our music for free and tell everyone we know about it, and even our closest friends sometimes don’t listen. As opposed to the earlier generations, ours doesn’t seem interested in what you have to say unless you go on Dr. Phil and scream profanities at your mother. So maybe in an alternate universe where people still cared about things like talent or just art in general I would be excited to answer this question, but our universe can “cash me outside.. how bout that.”

The music video for “All Night” is really fun and adorable. (Plus who doesn’t want to run around like crazy and cause a ruckus when they’re stuck in a hospital bed?) How did that concept come about, and what was the creative process like with the video? Any fun anecdotes?

We had a couple of ideas for this video but that all somehow involved a hospital. At first we thought it would be fun for me to actually escape, and roller skate to the nearest skating rink. Then I remembered I am awful at roller skating. We had this idea for a while but we never thought we’d get the opportunity to actually shoot it. Almost a week after we put it out of our minds we were given the opportunity to shoot any video we wanted, but it had to be done within a week’s time. The director, Logan Meis, was in LA working on a project and last minute was able to book a day with us. This was exciting, however I had zero clue about finding a hospital to shoot in. After some solid googling I found a hospital set in Anaheim that just so happened to have a cancellation for the exact day we needed. We wanted the video to show that happiness and joy can be present in even the gloomiest of places. When we’re alone and feeling depleted love is always the force that keeps as moving forward. Longing for someone you haven’t even met allows the imagination to run wild. The possibilities are endless, even in a hospital gown.

All we could think while watching the video was, “This belongs in a John Hughes movie.” It’s the visual representation of how we feel when we hear your synth-laden sound. Is this an intentional thing you go into your work aiming for, or has it kind of come about more organically than intended?

A.K.: Wow. Firstly, that is an amazing compliment and I know I speak for the both of us when I say that. As Jameson stated above we want our music to be an invitation to our world, and we want our world to feel familiar and nostalgic to everyone. We don’t want to create things that aren’t realistic. With so much going on in the world, the pressure we all feel from social media, and just life in general it’s important to keep things real and endearing. We want our music to take people to a place in their brain that’s familiar, comfortable, and reminiscent of a time in life that felt easier and less strenuous. For as much as I wanted to grow up and get out of high school, I cherish those memories the most. We grow up and grow out of our awkwardness but one thing I’ve learned is that insecurities feel just the same at any age, and it’s important to embrace what makes us different, what makes us happy. For us, that’s being forever young & courageous.

Jameson: I think this is possibly the greatest compliment we have ever received. I consider John Hughes films to be the perfect pop songs in movie form and I absolutely strive to create that same atmosphere and vibe in our music. The way he created such simple settings and still made them into something attainable and desirable was mind blowing to me growing up. I wanted to be in the breakfast club. If that was detention then I would have broken every rule to get in. I mean who didn’t want the charisma of Ferris Bueller?! He took normality and added endless possibility. The way we long for that feeling we had while watching those movies is something I have to insert in all of our music for me to feel like it’s coming across the right way. I want people to be teleported into a different world when they listen, but I want that world to be something familiar and nostalgic as well. So actually to go back to the first question, this is how I’d introduce our music. I’d travel back in time and have John Hughes use our music in all of his films. Then travel back to present day and use all of the money I made from his movies to buy Atlantic Records and fire whoever signed the catch me outside girl.

A.K., with your history in the industry and the obstacles you’ve faced to get your art out there, what do you think has been the most important factor or trait that has changed in your process, or how you go about producing your music now?

It definitely helps having an amazing producer in your band, that’s for sure. From the first time Jameson and I wrote together it just felt so easy and free. He has a way with seeing my vision, bringing it to life, and through his instrumentation he’s able able to pull so much out of me that’s been locked up for years. For so long my perception of writing music and recording was skewed. While logically I knew expression and creativity were the whole point of music, I found it hard to embrace being vulnerable when I was under the wing of bad management. It used to feel like writing with a formula and writing for approval. The greatest lesson I’ve learned is to throw out all the rules. I don’t write music because I want approval or want to be liked. We write because if we don’t, we’d probably just feel numb. If we ever feel like we’re forcing something we just pause.

What is the environment like when you’re recording? Do you find you work better in dark spaces, a designated studio, with drink in hand? Bring us into your BTS production-wise, and give us every detail!

Jameson: So I was going to say that it’s different for every song, but I thought about it a little more and realized that there is definitely a pattern. Almost every time we write something it starts with me just wondering into the home studio as if I didn’t know it was there and sitting down at the keyboard. I’m one hundred percent a guitarist but for some reason I don’t find the guitar as inspiring as the keys when I’m trying to create something new. So I’ll find some progression that I’m usually not sure about and A.K. will quietly walk in and say something like “what’re you doing?”. Once she spends about 30 minutes convincing me that whatever I’m playing is worth writing to, we get settled in. Or actually we run to the store and buy wine and then we settle in. A.K. Is actually a studio engineer as well so she’ll spend a good amount of time recording her vocal ideas by herself. I’ll comp some ideas together and then we get in my car. Car time is a necessity for us. We’ve finished writing a lot of our songs in the car. As far as environment goes, we definitely like the cozy home studio atmosphere. Feeling comfortable and knowing we can come and go as we please opens up our minds to express ourselves without insecurities. Honestly it doesn’t even matter what part of the house we’re in either. We recorded our song Indigo in my kitchen in Nashville. So as long as it’s our space, it’s the right space.

What do you consider in life to be beautiful – perhaps even art – that you hadn’t considered before, or that perhaps the masses don’t consider to be? Substantiate that claim.

Jameson: This might sound like a weak answer but I’d say friendship. Before I met A.K. I had spent years pretty much completely alone. I may have had a few people around that were sort of friends but they were usually met through working on a project together. Since moving to LA multiple people that I grew up with have moved here as well, and through them I’ve met even more people I now call friends. Having them in my life and spending time with them on a weekly basis has drastically changed who I am. I feel happiness on a much more consistent basis which for me is hard to come by due to clinical depression. My life is now manageable and so much more hopeful because of real friendships.

A.K.: I couldn’t agree more with Jameson. It used to bother me when people would say “it’s all about who you know” when trying to give advice about the music industry and how to share your art. That sentence alone doesn’t sit well with me because it implies we have to meet some “gatekeeper” in order to share our art. I like to remind myself that I can’t control what happens, but I can control my reaction, so that sentence has a new meaning for me now. It absolutely is 100% about who we know. We know our friends, our families, and we cherish them. You can’t put a price tag on real relationships and without them inspiration is non-existent.

Keep up with ALKE here.