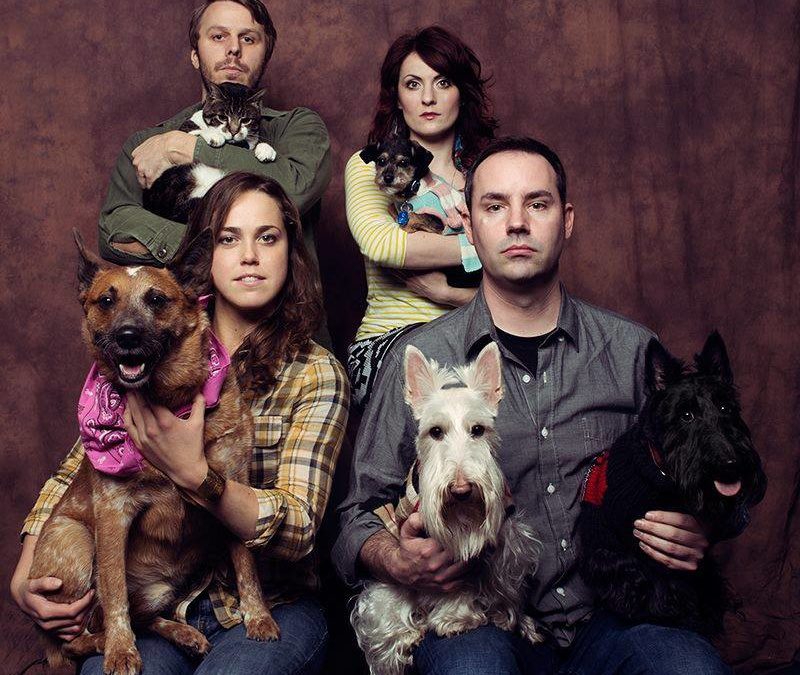 Seattle-based shoegaze/dream pop collective Ephrata – comprised of Skadi Von Reis Crooks (guitar, vocals), Brady Hall (guitar, vocals), Jules Jones (bass, vocals), and Ben Bromage (drums, vocals) – released their self-titled 11 track album just last month. The vocal harmonies they have been honing since their conception in 2011 are buttery smooth, with almost a kaleidoscope of personalized instrumental layers that make each song feel like an entire experience. We were big fans of the release, so we thought we’d let you in on why.

“Odds” has a very “I Melt With You” feel to its initial lines – though delivered as though it were released in the 50s – bathing its listener in light, nostalgic feels right off the bat. “Tunguska” is characterized by whirring guitars, the beat setting in after a couple of lines and really kicking the energy into high gear. But the song feels upbeat and light, while the lyrics are actually quite terrifying as they repeat “Run, run, scream and cry / Run for your life.” (Comforting, we know.) “Breakers” makes us realize that we may have embedded ourselves in a deceivingly light – but innately melancholic – work, as first line “Don’t you know that things were better when they were bad?” throws us into an almost existential mindset. And while we aren’t entirely sure what it means to “die on a sea of straight faces,” “Sea Of Straight Faces” is a slow, 50’s doo-wop sounding track that mellows you out for a bit mid-album.

Fifth track “Fiend Folio” seems to play with dissonance early on, addressing perhaps the fact that your road through life is paved with temptation and intensity (“forked tongues and fangs showed me the way”). We might be misinterpreting the lyrics, though they are – as their predecessors – seemingly bittersweet in their delivery and intention. “1000 Things” begins with a grunge/surf bass guitar, exploding into a beachy track that hits Beach Boys status pretty quickly and effectively. And while “What Is Mine” is indie rock at its core – it feels as though it could have easily been included on the Juno soundtrack – “Consequence” rolls right back into some hard beachy nostalgia for us all.

“Pharaoh” is light and upbeat in delivery. In fact, deceivingly so, as they’re singing about being shot and “entombed,” though the overarching theme might just be found in the line “pot meet kettle,” something we have been examining intensely recently, especially regarding people in power. (But I digress.) “Evil Twin” is a track that really makes you think. Clearly, the person whose perspective we’re examining is in denial about a seemingly abusive relationship, as she is convinced she met her significant other’s “evil twin” because of the way he treats her. “But when he appears you’re always gone…” How sullen and beautiful, this perspective on unhealthy relationships. Ephrata ties their 11 track release together with “Sun Scenario”, keeping with the devastating, lugubrious theme by instructing “fill your head full of dread ’til you’re dead,” which – to their credit – when examined has the opposite effect. It’s as though they’re encouraging you to embark upon this dark path, hoping you might take it as a challenge and move, instead, into the light.

But however you tend to interpret the lyrics, move forward. Examine your world through the lens of Ephrata’s music and use it as a learning tool. It will come in handy.

Ephrata is available now. Keep up with the band here.