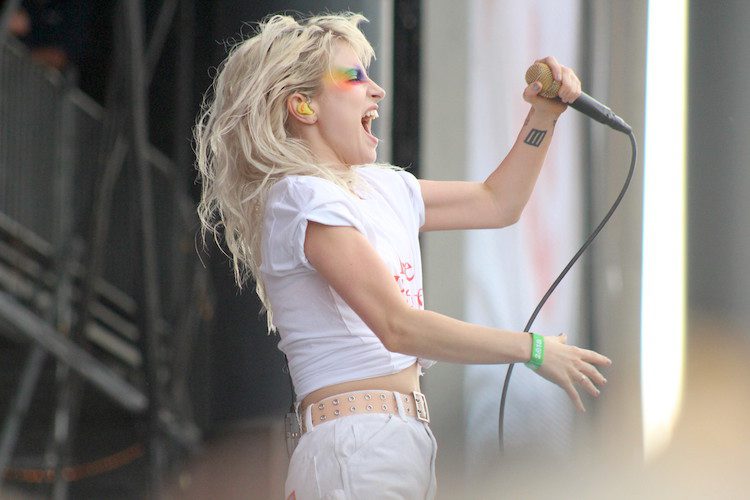 how paramore’s july 7th performance in kc woke me up

I write this, now, in the early morning, mere hours after Hayley Williams, Taylor York, Zac Farro, and their cohorts in Paramore walked off the stage at Kansas City’s picturesque Starlight Theatre. I have always – since I was blessed enough to go to my first show at age 9 – preached the importance of live music in all of our lives. I took many of my friends to their first concerts growing up, have had some stellar moments myself, and have had the joyous opportunity to experience live performance consistently in my life. I won’t go more in depth into it all, but I think you get the picture. I’ve been around this block once or twice.

I’ve even seen Paramore before. Albeit, it’s been years since I was able to introduce the magic of Hayley Williams to a handful of my friends at Warped Tour 2007. And perhaps that magic wore off a bit, as I became slightly more jaded by my experiences, and didn’t feel the need to pursue Paramore’s musicianship as they climbed in popularity. It was never out of disdain for the band, or even a dislike of the music. In fact, as singles like “The Only Exception”, “Still Into You”, “Ain’t It Fun”, and others surfaced, I found myself enjoying them insanely in rotation on the radio. Because Paramore has that pop appeal, their songs incredibly catchy and produced to perfection.

But the words are what really get me. At the core of it all, I am a big believer in lyricism. If you miss the mark instrumentally, but you have a mellifluous chorus full of double entendre, intelligent verbiage, or raw emotion, then I’m likely to listen. Hayley Williams does that.

Hayley Williams did that last night. Songs the band had written at differing points in life, songs that others have been into since the moment the album dropped in 2017, those songs reached my ears last night. Perhaps I’ve heard them once or twice, perhaps more. But last night, I was prepared. Last night, I listened.

Hayley explained that After Laughter is her favorite work of theirs to date, as long as they’ve been enchanting fans around the world. This struck me as odd, as the synthy, 80s-influenced work followed a current mainstream pattern that hit me wrong to begin with. But she explained that the album was about something deeper, their individual struggles – including her divorce and struggle with mental health – masked with this upbeat, insatiable soundscape. But she said she enjoyed that aspect, because it wasn’t fooling anyone but they could still have fun on stage during tour.

And, really, that was such an inspiring sentiment. Increasingly, people are coming out of the woodwork, detailing their struggles with their health, whatever form that may take. I, myself, have struggled immensely with diagnosed anxiety and other health issues, and find it so incredibly refreshing when an artist who has experienced success becomes vulnerable for the benefit of the world around them. If only everyone could be that courageous.

The band slowed their set down for “26”, Hayley’s ode to her 26th year that she wrote for After Laughter. I focused on the lyrics. And I identified with them. This song was me when I was 26. I was scared, I felt limited creatively and emotionally, and I felt alone. Hayley’s inability to hold it all completely together during this song increased its vulnerability, deepened her connection with the audience. Because, after all, I believe everyone can relate to that song on some level, and it made for a beautiful moment during the show.

You best believe Paramore rallied into the evening, bringing out fan favorites like “Misery Business”, “crushcrushcrush”, “Hard Times”, and “Ignorance”, and – though they chose not to regale us with my personal favorite, “For a Pessimist, I’m Pretty Optimistic” – I realized that I’m on a very similar journey in my life. If we take time to open our eyes, we really all are. We are all “fake happy” sometimes. We go out of our way to please others, allowing ourselves to stay in dark places. We fall and we want to cry and we feel unsupported. We feel like there is no space for success in our lives. We have bad days.

But it’s live music, it’s that connection we all have to one another – enjoying musicianship and life in what can only be described as a sacred space – that keeps us all floating. We’ll all hit “26”. We’ll all have that “Still Into You” love. (I’m lucky. That’s the Paramore song I have been living out lately.) We all want “Ignorance” to be our best friends. We just need to be open to being vulnerable. And – without worshipping the artist themselves – we can find inspiration in what these musicians create.

I know I did. Since last night, I can’t stop writing. I had a dance party this morning to my two new vinyls (After Laughter, Riot!) already. And I feel awake.

Local band YOU MONSTER YOU opened the evening around 6pm, with a performance at the Applause Club inside the venue. As Paramore fans streamed in, they welcomed them with their fun and upbeat brand of alt punk rock. “This is a song that sounds like it’s about leaving a small town behind and moving somewhere else, but really it’s about crippling depression,” frontman Trent Munsinger explained to the crowd about their track “Dodge”, which perhaps opened up the mental health theme of the evening.

The band was full of quips, quite the entertainment to get the crowd ready for an evening of Jay Som, Foster The People, and Paramore. A couple of songs into their set, You Monster You performed one of their original songs for the first time in front of a crowd, with a stand-in guitarist. They hit all the right spots with it, and at the end Trent confessed he was happy it wasn’t a train wreck, while the band noted it was “a solid B+.”

Keep up with You Monster You here.