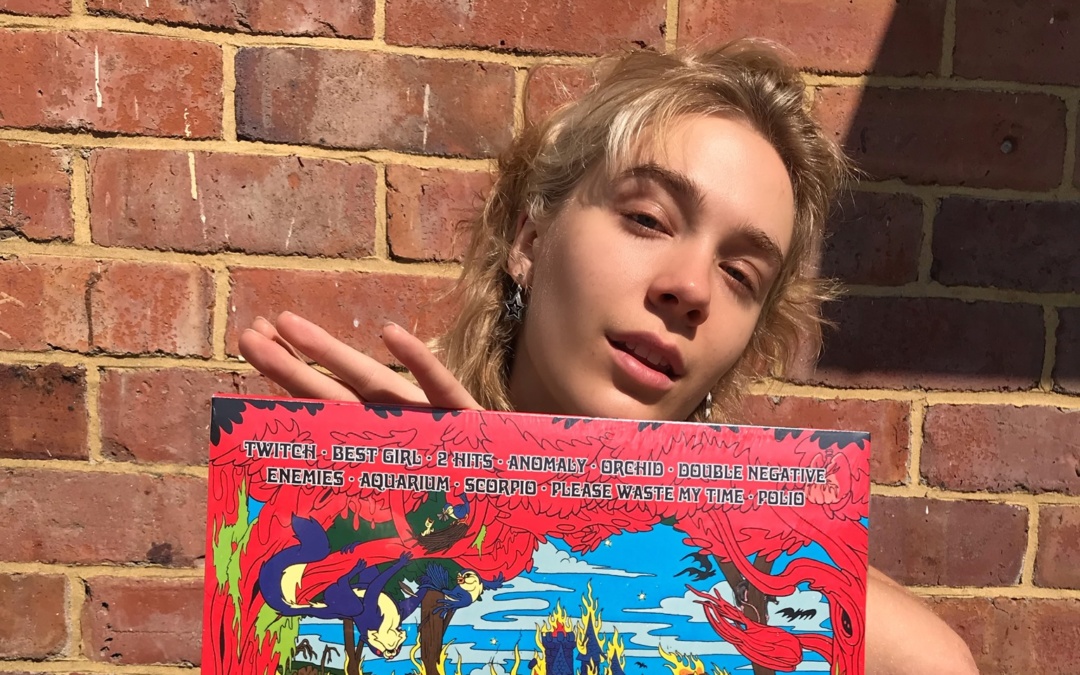 What do you get when you cross the youthful rebellion of 00’s pop-rock with contemporary punk? The answer is opening track “Twitch”; a smoldering, mile-a-minute plunge into the inferno that is Bad Luck Party. The first single of Bad Luck Party dropped in May of 2018, it acts an effective launch into the zeitgeist of the album, with dripping, electric fuzz stacked behind racing drum fills. “Twitch” especially stands out on BadLuck Party because it could fall first, central, or middle on the album’s track listing, and its catharsis would be perfectly timed regardless.

With track two – titled “Best Girl” – Miss June welcomes us into the first of many sarcastic rejections of the drags of femininity. A tongue-in-cheek nod to the album’s title, the chorus chants again and again: “It’s a bad luck party and nobody wins but me”, as voiceovers from vocalist Annabel Liddell whisper gossipy taunts over the anxiety of a tight snare.

Bad Luck Party never takes a breather, yet it does breathe a satisfying range of moods and dynamic differentiation. Tracks “Anomaly”, “Orchid”, and “Double Negative” are moody, narrative-focused, and feature toned-down vocals relative to their accompaniments on the album. Heart-swelling anthem “Anomaly” takes you right to a high school football stadium, where a protagonist fawns over a crush, with just a tinge of jealousy. Following suit in the spirit of reflective indie influences is “Orchid”; a pensive look into a dirty mirror that shatters if you stay too long. The lyrics of “Orchid” offer some of the clearest feminist commentary on Bad Luck Party, deftly melded with wracking heartache, as Liddell croons: “Ma says it’s easier for men to move on / There’s plenty of fish in the sea for a shark”.

The middle track on the album, “Double Negative”, is a simmering, melancholy beacon that carries with it an emotion not found many other places on Bad Luck Party; the urge to mourn. A cavernous cello carves out the space around Liddell’s vocals, creating a landing space for her regrets as she tosses them over the edge: “There was no time to talk”. An eruption follows, with any remaining boundaries combusting into unresolved questions.

There are more songs on Bad Luck Party album guaranteed to triple your heart rate than not. An anthem of repudiation, “Please Waste My Time” is arguably the wildest and most fun on Miss June’s spectrum of alt-punk. Just before her breakneck squeals send the chorus into chaos, Liddell’s contrasting shouts of “You make me feel old” break the tension, expertly shifting from frenzy back into musicality. On “Two Hits” and “Aquarium”, Liddell lobs rapid, ear-splitting screeches in rapid pace, demanding the forefront of attention, even over the thundering, metal-style guitars. Second-to-last song “Scorpio” is no less thrashing, but is marked by the softer, melodic singing of a ballad as opposed to the ravenous contempt wreaked on earlier tracks.

“Enemies”, a single released earlier in 2019, opens gradually and dramatically, drudging through a nightmarish yet fascinating landscape of stinging feedback and reverbing leads, before trenching into Liddell’s warning lyricism. This track is an ode to massive stadium rock acts of the past like Metallica, as well as extant subgenres like metalcore– all with Miss June’s defining riot grrrl explosivity. Matching the doom of “Enemies” is final track “Polio”, a finisher welded together with every trick in Liddell’s arsenal: Cautioning whispers give way to spoken directness, gradually ascending into screeching ferocity; nearly eclipsing the deafening crash of the surrounding scape.

Miss June is comprised of vocalist and guitarist Annabel Liddell, guitarist Jun Cheul Park, bassist Chris Marshall, and Tom Leggett. Next month, the group will begin their world-wide tour in celebration of the album’s release. The Bad Luck Party Tour will kick off in Wellington, New Zealand and October 14 sees the band play Brooklyn’s Rough Trade which marks the start of the North American run that includes shows in Toronto, Chicago and Los Angeles. All dates are listed below. Tickets and more tour info can be found here.