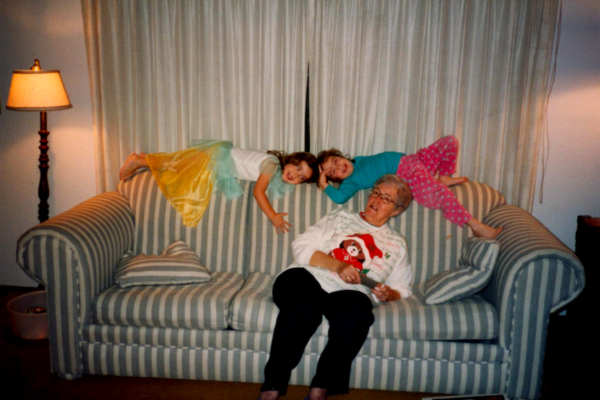 The best holiday movie memory I have? Watching Home Alone for the first time with my three-year-old twins and my 84-year-old grandmother.

When Home Alone was released in 1990 in theaters, I completely missed it. To be honest, I missed most things in 1990. After having twins in April, our family made a major move from Missouri to California in August, and we moved into a house the first part of December. I had heard about cultural touchstones in my periphery – I do remember that 1990 brought us Milli Vanilli’s “Best New Artist” Grammy. Most everything else was a blur. How could I have predicted that I would miss the movie that held the record for the highest-grossing live action comedy? A record it held until 2011! What could be so mesmerizing about a movie with such a simple concept?

I found out in November of 1993. At three years old, the girls were mobile, could dress themselves and feed themselves, and had fun personalities. My grandmother had come to visit for the Thanksgiving holiday and Home Alone was going to have its broadcast world premiere on one of the networks. We were set for Thanksgiving night entertainment.

I have never heard anyone laugh so often at a movie than my grandmother. I had parental angst when I saw the plane ticket go in the trash with the paper towels in the kitchen. I felt tense when the kids were counted and the neighbor kid gets counted by mistake. I am not a fan of slapstick, but when the hijinx started with the Wet Bandits, I started to loosen up and really root for Kevin.

My grandmother had a ball. The kids were laughing at all the things Kevin did and tried to guess what would happen next. Watching the three of them, at two ends of the age spectrum, see something for the first time, really made me appreciate this movie with a simple concept. My husband and I were seeing it for the first time as well, but we really were seeing it through their eyes. Since we were in our living room, the kids could run around, laugh with abandon, and talk without any editing.

The next day brought a trip to San Francisco where I took pictures of my grandmother with her great-granddaughters at the Golden Gate Bridge. Wonderful shots, but I treasure the ones on Thanksgiving night just as much.

Because Home Alone was released on VHS for the Christmas season of 1993, we bought it, and each subsequent media iteration thereafter. It became a tradition to watch this Christmas movie on Thanksgiving for many years after. Even though we all know how it will end, I still feel angst when the plane ticket goes in the trash and I still feel tense when the kids are counted incorrectly.

And now, after all of these years, I still cheer for Kevin.