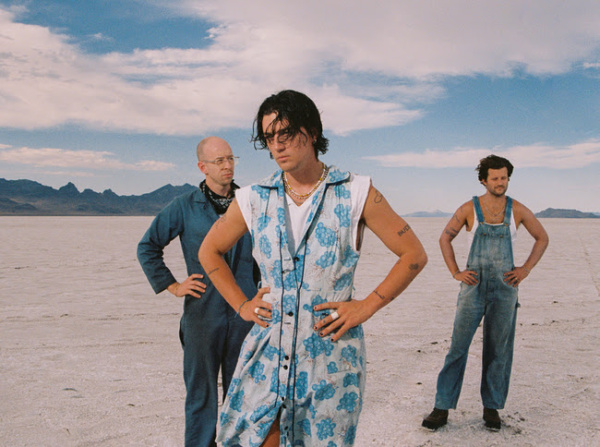 L.A.-based trio LANY has released its soothing new single and music video, “you!.” The band first revealed themselves to the world with their self-titled debut in 2017 and secured their reputation with their 2018 album Malibu Nights which cracked the Billboard Album Chart. They have millions of followers and billions of streams from across the globe, which they follow up with by playing sold-out shows from L.A.’s Greek Theatre to London’s Brixton Academy. Now, they’re back with their upcoming album mama’s boy, set to release on October 2nd. “You!” is the third single to be released from mama’s boy, following “if this is the last time” and “good guys.” After finishing their Malibu Nights world tour, Oklahoma-born songwriter, lyricist, and producer for the band Paul Klein made his way to the country outside Nashville and began to outline mama’s boy. Working with several accomplished songwriters, Paul began to reconcile the differences between his newly found L.A. persona and his Great Plains heritage.  “Someone asked me where I was from and somewhere, out of my spirit, I just said ‘Man, I’m from Oklahoma!’ It was a weird sense of pride, to be from the middle of nowhere,” he says, pointing to the inspiration behind the album. In the video for “you!”, we see this deeply rooted pride in Paul’s homeland come to life with nostalgic musical scene painting that ties in perfectly with the barren landscape.

Over the course of the video, the sun peeks over the horizon at varying degrees, sometimes shrouding the trio and revealing them only as silhouettes, sometimes shedding light onto them and their strikingly sincere demeanor. The music is straightforward and genuine, with a concise use of calm instruments and atmospheric harmonies that achieve the nostalgic sound without excess, matching perfectly with the secluded environment that is empty save for the band and their equipment. Each verse feels somewhat removed, consisting mostly of vocals and slightly muffled drums with comments from the guitar now and then. The chorus brings everything into focus, with each instrument part adopting a clean sound that resonates with the listener. The video, shot in the middle of nowhere, evokes a sense of eased isolation– and although it’s a nod to Paul’s memories of Oklahoma, it also reminds us that isolation isn’t necessarily a bad thing. In the context of the pandemic the idea of being removed from society is not ideal, but when you watch “you!”, you really feel the sanctity and peace that can come from taking a step back.

It’s always important to take a moment and let yourself breathe. Let “you!” and the perspective it brings be that moment for you. Listen here.