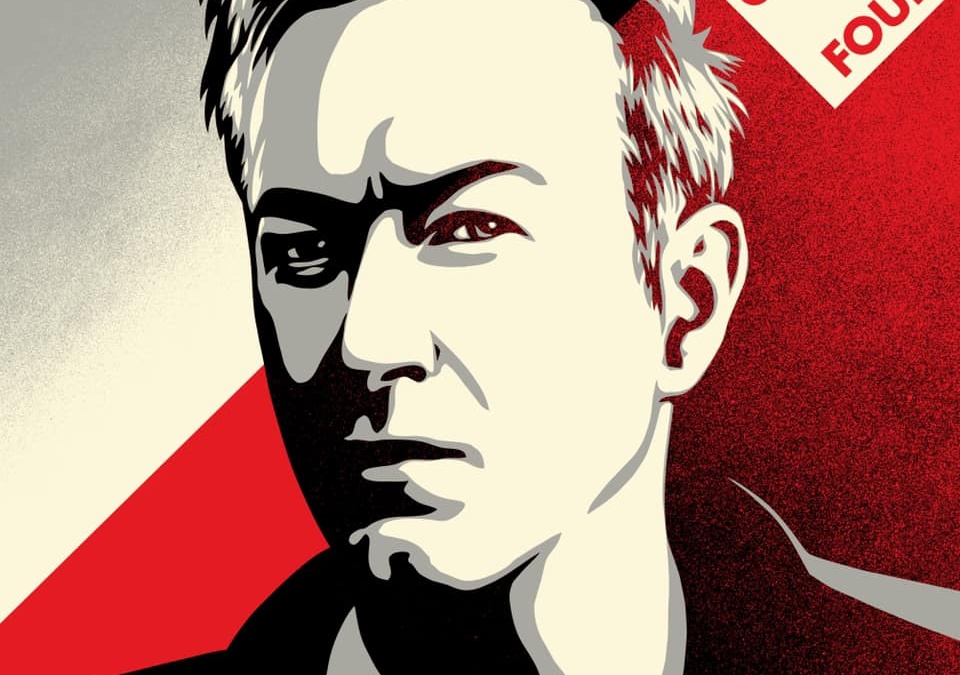 The English post-punk legend Gang of Four’s new EP Anti Hero dropped today. The EP is a celebration of the life of band member Andy Gill who passed away in February. Gill’s widow Catherine Mayer joined together with the band to memorialize Andy through music and to fundraise for Guy’s and St Thomas’ Hospital– the hospital that worked tirelessly to try and save his life. All net receipts received by the band from sales and streams of the forthcoming EP and associated singles will be donated to Guy’s and St Thomas’ NHS Foundation Trust so that they can continue their valuable work. Anti Hero features two new tracks and new versions of old songs that were completed at the time of Andy’s death. “Change the Locks” and “Glass” were written before we were really in the throes of quarantine, but resonate with it nonetheless. “[Andy’s] ability to write songs that remain relevant was unparalleled,” says singer John Sterry. Bassist Thomas McNeice worked with Andy’s longtime friend and collaborator Santi Arribas to produce and mix the EP. McNeice says “I like to think that this EP exhibits a progression in Gang of Four, while paying tribute to a unique talent that I was extraordinarily lucky to work with.”

The title Anti Hero comes from the first single off the EP, “Forever Starts Now.” Written by Gill and Sterry, its original working title was “Hero,” referring to the lyrics which describe “a character who sees himself as the hero of his own life and manipulates his partner into supporting this fantasy,” according to Sterry. Andy was always wary of narratives surrounding supposedly great men, hence the word “anti” in the title. You can hear the aggression and conviction of the character in “Forever Starts Now”, especially in the bass. There are two bass parts, one electronic, one physical, and both attack each note with the ferocity of a deluded man. The rest of the music is made up of these short, fragmented motives in several different voices that give the track an unsettled quality, which also plays into the instability of the character. All these fragments create a really full sound, however, using mostly physical instruments but also some hints of electronica. It’s disjunct and edgy, yet incredibly easy to jam along to.

This unsteadiness is also mirrored in the second single, “Day Turns To Night”, but rather than being fueled by delusion, it’s fueled by the inner turmoil that one experiences after a loss. Sterry wrote the song only days after Andy’s death, and while he didn’t intend the song to be about him, it evolved into a tribute anyway. The track is made up of chaotic electronic sounds interspersed within a foggy musical atmosphere. Touches of angelic, but ghostly harmonies peek through every once in a while. This amalgamation of sounds are overwhelming, like a sensory overload, reflecting how grief can feel. However, the lyrics are clear. They are a plaintive but touching message to Andy with lines like “Is it too late to say thank you?” and “You forever changed my fate.” In some sense, it’s as though the mayhem in the music is giving you an out– something to focus on. Because if you pay attention to the lyrics, the emotions are piercing.

To complete the EP, the two reworked tracks “Change The Locks” and “Glass” update the sound to fit the vibe of the EP. “Glass” retains some of the 80’s energy from the original 1979 version, such as the DEVO-esque vocals, but it feels edgier with the pounding beat of the drums and guitar. The repetitive guitar licks and lyrics bring back the unstable sound of the first two tracks– as though the whole song is twitching. It’s short and restless, ending abruptly.

The original version of “Change The Locks” is much more recent than that of “Glass”, appearing on their 2019 album Happy Now, and consequently sounds more modern with lots of electronic elements and a pop-punk character. The Anti Hero version leans more towards alternative rock, with less bouncy electronic sounds and more distorted guitars that sound almost like buzzing. Funk comes into play in the bassline which maintains a steady groove throughout the track. The bridge adds a deep uniqueness that makes “Change The Locks” the standout track on the EP. It begins with simple, static drums, guitar, and bass. As Sterry sings “bang bang on the drums,” the drum beats ring out like shockwaves. It then dissolves into an old-timey sounding piano part before the chorus comes back, sounding familiar but also different after the mood shift that just occurred in the bridge.

Anti Hero is a wonderful celebration of a valuable band member. It honors him, not in a lachrymose way, but in a way that connects with who he was as a person and musician. The skilled musicians create music that has ties to the 80s post-punk roots of the band that Gills co-founded back in 1976, and highlights songs that Andy wrote, but also songs that capture the impact he had on those around him.

Keep up with Gang of Four here.