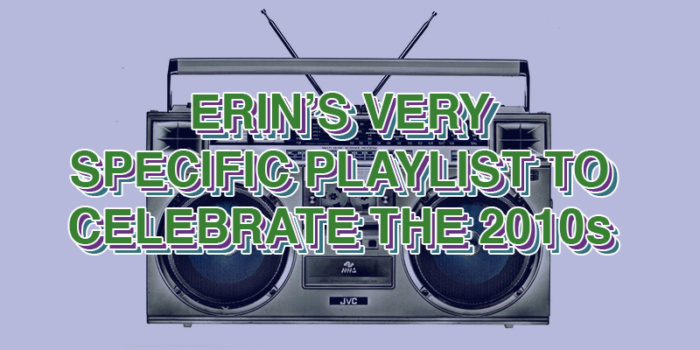 Erin P.S. Zimmerman has not only the memory of an elephant and the rhythm of one of Destiny’s children, but she’s the twin sister of our Editor, so she’s an absolute magnet for pop culture. She took a side road and grabbed us a large quantity of songs for a playlist that easily covers the entire decade. We’re sure it was inspired by her Spotify plays, as well as a deep dive into each year and her own iTunes library. But this girl’s got some gems. So read em, listen to em, and celebrate 2020 with the sounds of the past!

Dick in a Box – Lonely Island ft Justin Timberlake
One of the first times I realized that my mom has a wicked dirty sense of humor. In 2011, we requested this one at a piano bar “for our mom”. They pulled her on stage to sing and dance…and boy, did she!

I’m on a Boat – The Lonely Island
Everyone seemed to know this one, and it brought us all togethe

Water Landing – Third Eye Blind
Favorite TEB song. My new bf at the time – now my husband – made me a mix CD when we started dating, and this was the first song.

Boom Boom Pow – The Black Eyed Peas
“You’re so two thousand and LATE!” – Also, my sorority formal date’s “THIS IS MY JAM!”

Gives You Hell – The All-American Rejects
Our anthem for all the bullshit left behind in high school.

Use Somebody – Kings of Leon
Favorite moment of my study abroad trip to London: a packed room at a bar singing this to a live band playing a cover.

Party in the USA – Miley Cyrus
There is no physical possibility she could walk off the plane at LAX, hop in her cab and look to the right to see the Hollywood sign.

Battlefield – Jordin Sparks
Why DOES love always feel like a battlefield?

Fireflies – Owl City
Why did we like this one so much??

I Love College – Asher Roth
This is the given on the soundtrack of someone who was in college in 2009 or any year after.

Breakeven – The Script
This introduced me to The Script. Which became part of the soundtrack to my summer.

Lines, Vines, and Trying Times – Jonas Brothers
YES, this is the whole album. Because I loved about 4/5ths of it. And it was the magical soundtrack to exploring London and Los Angeles.

Cooler Than Me – Mike Posner
Someone told me they thought of me every time they hear this song because I probably think I’m cooler than them. I am.

Billionaire – Travie McCoy ft Bruno Mars
Heard this one for the first time driving around Los Angeles with some friends. And I could picture myself as a billionaire VERY clearly – and still do every time I hear it!

Club Can’t Handle Me – Flo Rida ft. David Guetta
Always blasted in my dorm with my roommates. Always never at the club…because it can’t handle me right now.

Whataya Want from Me – Adam Lambert
I felt like I had his vocal range. Spoiler alert: I didn’t. Also: what I sang in my head every time someone from high school reached out to me…

If I Die Young – The Band Perry
My co-worker’s young daughter loved this song. And creepily sang every word as she stared deep into my eyes. I lived to tell the tale.

Shout It Out – Hanson
Yes, it’s another boy band album. I truly love all of the upbeat music on this, and it’s great for running through the sprinklers and then enjoying a bomb pop on a summer day (or upbeat music for your NYE)!

Under the Mistletoe – Justin Bieber
My sister received a video invitation to a Christmas party in Manhattan, New York that featured this song. And it was original and funny and I can’t help but love the song now.

Party Rock Anthem – LMFAO
My little bro learned the dance. We made the gold box head from the video for him. This was his anthem.

Look At Me Now – Chris Brown ft Lil Wayne and Busta Rhymes
I spent an entire week vacationing in San Diego practicing rapping to Busta’s verse. I got most of it, performed it at my 21st birthday party, and retired from the rap game.

Jessie J’s entire album: Who You Are
Spent the summer – and fall and winter and spring – driving around with my twin sis rockin’ out to this one! Daddio’s favorite is Price Tag

Threw it on the Ground – The Lonely Island
Makes me giggle. Referenced often to this day.

Somebody That I Used to Know – Gotye
Just one of those songs from 2012 that defined the year…because it was played non-stop on every radio station. So, everyone knows it.

We Are Young – Fun
Another one of those anthems for people of all ages about going out and  painting the town red – or setting it on fire, whatever

Ni**as in Paris – Jay Z and Kanye West
A fun one that made at least SOMETHING in Blades of Glory funny.

Thrift Shop – Macklemore and Ryan Lewis
Who didn’t love this song, and then become a complete thrift shop junkie? It took me years to get back to thrifting and getting anything good!

Flawless – Beyonce
Empowerment anthem OF THE DECADE. And, most days? I DID wake up like this.

Mirrors – Justin Timberlake
Cried. Sang it with the windows down driving up the 101. Made my bridal party do a dance to it. There is video evidence.

Royals – Lorde
I had somehow forgotten this song. It played in perpetuity from 2013-the KC Royals 2015 World Series Championship. Now I can’t get it out of my head…

Wrecking Ball – Miley Cyrus
An ode to Miley’s breakup, breakdown and ripping off the bandaid that was her Disney persona. And you, too, can get a skin for your MacBook that turns your Apple logo into the wrecking ball in question.

Girl on Fire – Alicia Keys
ANOTHER empowerment anthem? We will take all of them we can get!

Try – P!nk
Have you ever seen the music video? Watch it. NOW.

Happy – Pharrell Williams
Who doesn’t want a feel-good song to take you from down in the dumps, to dancing on the hood of your car? Or the bar? Or the table or the street?

All of Me – John Legend
Bawled. Became first dance at wedding. Years later, I told John Legend to his face that he only makes music to purposefully make me cry. And he guaranteed tears at his concert. And he delivered. Damn him.

Turn Down for What – DJ Snake and Lil Jon
Only video I took at my wedding: Dance off in the foreground between 5 VERY white boys to this song. In the background? Family friend Russian kicking my 9-year-old niece into 2016.

Chandelier – Sia
I DO want to swing from the chandeli-here!

Partition – Beyonce
This one just has me feelin’ myself, no matter what mood I was in before! In fact, I’m going to go listen to it, now!

Take Me to Church – Hozier
The year I really STOPPED going to church. But his voice more than made up for it!

Outlaws – Alessia Cara
I felt like this was the anthem for myself and my fellow entrepreneurs as we retreated in the mountains and built our businesses and white-water rafted and had a jolly ole time.

House Party – Sam Hunt
How the twin and I have always lived our lives: entertaining from the comfort of our own homes.

Sorry – Justin Bieber
OK, let’s be honest. The whole damn album. I’m not embarrassed. I danced my way through 2016 to JB.

Work from Home – Fifth Harmony
I had just started working from home as a full-time freelancer when this one came out. So, it was constantly in my head – and is a fun one to dance to, as well!

Just Like Fire – P!nk
Apparently, I am drawn to fire. I believe it’s the Aries in me…

One Call Away – Charlie Puth
Sister broke up with her boyfriend. I rallied the troops and had friends and family from across the US lip sync on video and put it together as a breakup gift. And a perpetual reminder.

Sit Still, Look Pretty – Daya
Calling society in to question. While being catchy and easy to dance to? Yes, please and thank you! Because smashing the patriarchy can and should feel a hell of a lot more fun!

Lost Boy – Ruth B
Haunting, gender-bending, put into question how we see ourselves vs. how we are seen.

HUMBLE – Kendrick Lamar
I saw this one as a challenge for me to be less humble and take up space, while also singing along loudly in the direction of folx who need to sit the f*** down, shut up and listen.

Say You Won’t Let Go – James Arthur
Does anyone else see Jane and Rafael from Jane the Virgin when they listen to this song? No? Just me?

Redbone – Childish Gambino
A range and style no one expected, but everyone needed.

Slow Hands – Niall Horan
Sexy from a former One Directioner…I should have seen it coming.

DNA – Kendrick Lamar
The BEST song to lift heavy weights and smash a bag around to! TRY to tell me differently!

Better Life – P!nk
Sad and beautiful. It helps me to stop and take inventory and answer P!nk’s question for myself.

Younger Now – Miley Cyrus
How I feel with each passing year…

Everybody Lost Somebody – Bleachers
Bleachers makes depression fun by helping folx find commonalities in one another. YOU are not alone!

[Some of the above songs are in the article about favorite albums I wrote to wrap up 2017: http://imperfectfifth.com/top-17-of-2017-from-someone-whose-opinion-you-shouldnt-care-about/]

This is America – Childish Gambino
Calling us out. Poignant. This IS America. Always and still.

God is a Woman – Ariana Grande
Finally. Someone got it right.

Shape of You – Ed Sheeran
I’m still trying to hate it. But every time it comes on – and it still does a LOT – my foot just gets a’tappin’!

Thank U, Next – Ariana Grande
I find myself singing this at my husband of 5+ years. Gotta keep um on their toes!

Hey Look Ma, I Made It – Pan!c at the Disco
Haven’t heard much from Pan!c since the mid 2000s…and now they are back and better than ever! In fact: theirs was my favorite show of 2019 (and Elizabeth’s! Check out her review here: http://imperfectfifth.com/elizabeths-favorite-shows-of-2019-dont-threaten-me-with-a-good-time/)

7 Rings – Ariana Grande
Sound of Music is my favorite. And so are my bitches (though, I don’t have 6 of them…probably)

Old Town Road – Lil Nas X ft Billy Ray Cyrus
Lil Nas X became a role model, THEN came out (and became an even BIGGER role model), all while trolling us with this annoyingly catchy – but really bad – anthem of 2019.

Bad Guy – Billie Eilish
Hate to say it…I love it. Because, well, I don’t always want to be the nice guy!

Homecoming: The Live Album – Beyonce
Watching it live. Listening to it in its entirety. Tears to my eyes and over a decade of music and emotions.

Learn more about Erin at EZVisibility.com.

Erin P.S. Zimmerman
Producer/Photographer/Connector at EZVisibility
Erin Zimmerman is the owner of EZ Visibility, where she serves as visibility strategist, film and podcast producer. She helps marginalized voices create fun, sustainable action plans to grow their brands and make a name for themselves so they can be heard, be seen, with ease. For Imperfect Fifth, Erin is a writer and photographer.
Latest posts by Erin P.S. Zimmerman (see all)