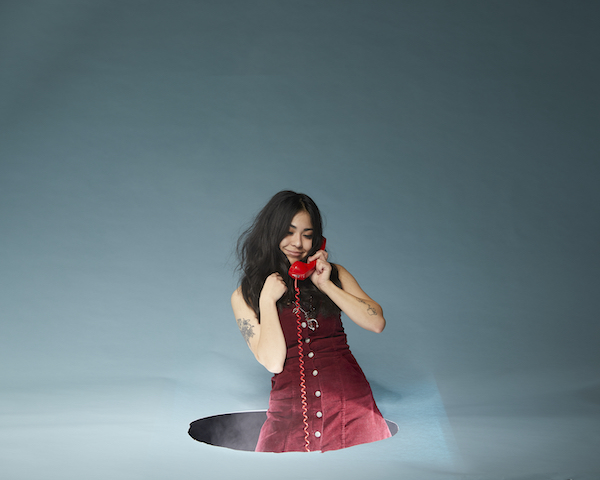 Sophia Nadia’s admired reputation as an “unapologetic do-er” comes from her remarkable dedication to her career. Her unceasing penchant for touring beginning at only 16 years old and her courage to move to Chicago not long after shows that her commitment to her work knows no bounds. In the moments of time when she’s not touring, Sophia is fervently writing and recording her next release, each one furthering her excellent orchestration skills and exploring pop and rock genres. Her Chicago-based project Cold Beaches dropped their new album Drifter today, a work of art that is as limitless as it is intimate. With a newly founded voice of empowerment for Nadia that makes its appearance in the album, Drifter is a vivacious, live recorded movement away from the band’s earlier lo-fi bedroom pop sound towards psychedelic rock ‘n roll. Some influences to keep an ear out for for are the plain-spoken lyrical integrity of 90’s Pavement, the hard garage rock sound of Ty Segal, and the hypnotic indie surf pop of La Femme. While Drifter deals with a variety of feelings, from the losses of relationships to the optimism of independence from depression and anxiety, it’s also an emotional blank page that any listener can fill with their own feelings and find comfort in whatever way they may need it. Nadia hopes that people find solace in her musical offering, especially those who are marginalized in the music industry.

Drifter must get its name from its transient tracks that freely move between grungy rock and dreamy psychedelic pop. Certain tracks drift closer to one side or the other, however. “Ride”, “Somebody”, “Band Boy”, “Boy, You’re Evil”, and “Grief Stricken Blues” all stay more or less tethered to the earth with their grounding drums and substantial guitar riffs.

“Ride” is twangy western guitar meets energetic girl-power pop, with its uncomplicated lyrics and matter-of-fact vocals. The song follows a narrative about stealing a “villain’s motorcycle.” Though it’s unclear whether it’s showing Nadia’s heartbreak or her ruthless besmirch of this man, this track is a poetic metaphor for giving deserving “villains” in the scene what’s coming to them. The chromatic descending power chords and her repeated vocals create revving instrumentals that show off Nadia’s orchestration skills, setting a tone for the album that says it’s going to be just as much about the instruments as the vocals. “Somebody” reveals a similarly manic and merciless side of Nadia. In the music video, her motel stay is interrupted by a troubling phone call and her night turns into a nightmare filled with paranoia as she barricades her motel door; protecting herself from an evil man trying to steal her heart. It’s brief, suspenseful, and incredibly fast-moving with fuzzy guitar riffs and straightforward drums and bass that are a manifestation of the true terror and disgust Nadia has towards anyone who may try to take advantage of her. The creepiness that pervades this track is enhanced by the whispered vocals– even more so with headphones.

“Band Boy” does feel a lot like psychedelic pop, but the strength of the beat and chromatic guitar overpowers Nadia’s muted vocals and the jazzy chords. The chorus is the epitome of pop, from its bouncy beat to the high vocal line, and even the word “bubblegum” finds its way into the lyrics. “Boy You’re Evil” also has dampened vocals and a full-bodied chorus, but the rock-centered drums and the brightly toned guitar are there to keep the track from drifting too far. “Grief Stricken Blues” uses major 7th chords halfway through the first verse, but they’re bright and thick in texture. The opening guitar riff is concrete, and once the bass and drums come in it gains that bit of grit that comes with blues-rock, but it somehow feels soothing rather than edgy. As tangible as the verses are, however, the chorus can’t help but detach with dreamy guitars that bring an element of sonic euphoria. The opening guitar riff persists into the next verse and the outro, and by the end of the song it’s comforting nature makes sense as the familiarity of its obstinacy feels like an old friend.

While the pleasant haze that falls on “Grief Stricken Blues” can feel quite salient at times, “Problems & Heartache (I Got Them)”, “Love Me”, and “Go Easy On Me” take it to a new level. These kaleidoscopic tracks are otherworldly in their instrumentation, once again showing Nadia’s aptitude for composition. The dream-pop synth chords, reverberating guitars and gentle, crooning vocals in “Problems & Heartache (I Got Them)” seem to bleed into each other, creating an otherworldly experience. The lyrics are vulnerable, transporting the listener to a place where the music– and Nadia’s feelings– are intricate, yet succinct. Touches of dissonant chords and notes add that bit of pain that is an inevitable part of opening up. When you listen to this one, close your eyes and let it envelop you. Feel the celestial surprises crash into one another. “Love Me” definitely leans towards soft rock with the prominence of the bass and drums, but after the initial pining solo bassline, a wave of illusory musical nostalgia crashes into you. Nadia’s misty, honest vocals sing “Love Me” on top of jazzy chords, the flavour of which is continued by an apt sax solo that floats in after the chorus. The ending track “Go Easy On Me” begins with a distorted organ-like part that creates a feeling of melancholia as Nadia sings “go easy on me” on a melody that embodies poignancy, again using discordant notes. Her singing is kept in place by the drums, but it’s on the verge of floating away, like a helium-filled balloon loosely fixed in a child’s grasp. The woodwinds in the instrumental interlude have the beauty of a whole orchestra and are followed by a sharp guitar solo that tries to cut through the magic but can’t quite. Sure enough, by the end of the track, all the music has floated away.

All the songs so far have explored the line that separates garage rock from psychedelic pop, and have dabbled on either side, but Nadia also offers two tracks that represent the poles of illusion and reality. The muted vocals and folksy, slightly out of tune acoustic guitar makes “SGIT” sound removed, like a dream or a passing thought. The lyrics are sad, “I hate myself and everybody else,” but perhaps hopeful as well, “I should stick around.” “I Miss You So So Much, I Really Do” isn’t concrete in terms of its music, the piano background is as tender and gentle as it is passionate and vastly resonant. Instead of a vocal line, however, there is a voice recording that sounds like it could be taken from a voicemail. It’s hard to make out much of what the voice is saying, most of the words are lost in the waves of ambient piano, but what does come through is the line “I really really really do miss you, I really do. I really really miss you… a lot.”  It’s the intimacy and the honesty that pours out of this recording that makes this one-minute track the most tangible of all.

There is a lot going on in Drifter, but there are certain qualities that make it stand out as an exceptional piece of work. Its transitional nature that comes from Cold Beaches’ development into a more polished sound calls to mind ideas of rebirth and reinvention, something that is not only attractive for the album but builds intrigue for the band’s future. Each song has oodles of quirks to listen for, allowing you to listen to them on repeat without fear of them growing tired. Despite the fact that Drifter’s tracks are incredibly varied in sound, they have this unifying tone that to them that sounds like 9 pm in the middle of summer: warm, light, and seemingly too good to be true. Most of all, however, Drifter is dripping with potential, and I for one am excited to see what new heights Cold Beaches will undoubtedly reach in the future.