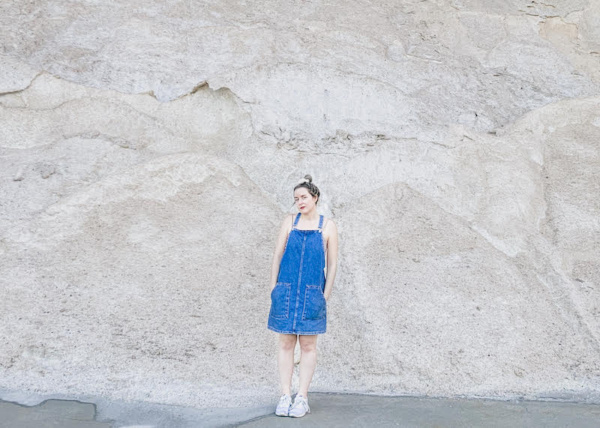 In an effort to work through the trauma of a psychologically abusive relationship, Caitlin Pasko offers Greenhouse: nine hauntingly pensive songs that aim to heal the self and move on from past wounds. A greenhouse is a structure that protects plant life from unfavourable external conditions, and in the same way Greenhouse provides a safe space for Pasko’s songs to grow and flourish into understanding and acceptance. The album is deeply involved with the concept of space– both in a metaphorical sense with its title, but also in terms of its sonic atmosphere. All the songs exist suspended in space, and silence works hand-in-hand with language to provide room for Pasko’s thoughts to form and evolve. “Ooo Happy”, a fleeting and chilling mid-album interlude has fourteen seconds of silence at the end before moving on. There are no words in this silence, and yet it speaks volumes. Much of Pasko’s gentle and breathy vocals on this album are delicately supported by sparse accompaniment, but each line carries so much weight. The accompaniment sometimes comes in the form of electronic atmospheres or decorative plucked strings, but most often in the form of ambient piano playing. Pasko’s compositions fully explore the tension between dynamics, tempo, and space, reminding one of Satie or Debussy. Her songs feel liberated from tempo, as her vocals and elegant piano melodies freely move like fantasias. In “Unwell”, the placement of each word and each chord is liberated from any sort of beat, but at the same time is deliberate and effective.

“Unwell” is also the first of a trio of songs on Greenhouse, manifested from Pasko’s walks through Brooklyn in 2017. During these walks she experienced dissociation– a kind of out-of-body sensation where she felt like she was floating above herself, viewing herself from a different point of view. Pasko channels this idea of multiple points of views in “Unwell”, “Mother”, and “Even God.” She crafts parallels in her lyrics between songs, such as when she talks about walking a neighbourhood that isn’t hers in “Unwell” and then sings “Today I remembered what it feels like to go walking on the sidewalk in the city that’s not my city” in “Mother”, the lyrics in both songs spilling over one another, feeling like a wandering thought.  “Mother” plays with perspective as well, towards the end she sings “She’s my daughter, I’m her sister, she’s my sister, I’m her mother, she’s my mother” and delves into the idea of becoming a mother herself, with a second voice joining her in harmony when she talks about creative another life. “Even God” is written from the perspective of Pasko’s own mother and  recalls Greenhouse’s inspiration: an abusive relationship. “Even God” is about being trauma-bonded to an abusive partner, with the principal lyric “Even God is selfish” playing with the idea that “nobody’s perfect.” About the song, Pasko says “‘You can sleep in / just make the bed’ is me saying, ‘I will put up with these bouts of cruelty, because I know you love me.’ It’s dark. I was sick. I was twisting the truth in order to cope with my reality, and as I started to believe my non-truth, I also turned against my friends who wanted to help me. If I believed them, then I’d have to admit to my own hell.”

So while “Even God” is about Pasko’s relationship with her partner, it’s also about how her situation affected her relationship with her friends, and even herself. Greenhouse documents the dissolution of relationships, romantic, platonic, and familial, all the while developing her ever-evolving connection to herself. “I Know I” uses two part harmony to represent Pasko’s child self and her inner mother, and how they communicate. The lower harmony briefly becomes the lead in the middle of the song, but soon enough returns to its original role, functioning as a metaphor for the conversations that take place between the mind and the heart. We hear this metaphorical harmony in “Mother” as well, when Pasko mulls over the possibility of motherhood for herself. At times, the album highlights relationships in the form of a dichotomy, such as in “Horrible Person.” The deeply reflective nature of the track contradicts its themes of self-abandonment and toxic enmeshment. Therefore, the “horrible person” is not only the abuser, but also the self as seen through someone else’s distorted, narcissistic mirror. Pasko composed the track a cappella, alone in her bed, in the dark, in an attempt to develop a reclamation of personal agency. It became the album’s centerpiece, and uses electronic sounds to create tension but also to depict an underwater chasm. Flickers of sound represent neon diatoms that dart around Pasko, eventually overtaking her right before the song ends in a deafening silence.

“Horrible Person” highlights how an abusive relationship can have reverberations in other parts of someone’s life, and when it’s over you have to remedy that. But a part of healing is confronting what happened and believing one’s own survival story. Pasko rewrites the narrative surrounding her experience in “Quiet Weather” and “To The Leaves.” In “Quiet Weather”, Pasko uses metaphors for herself and her partner to evoke imagery of a lake with still waters, showing her sense of lyrical craftsmanship. She attempts to exhume the past to allow herself to move on, singing “When I think of you I take a shovel to my chest and dig as deep as I can get.” “To The Leaves” is an artistic wonder that stitches together fragmented versions of the self in order to regain a sense of personal identity. With the words “It’s hard to believe that I was ever a peach in the leaves / It’s hard to believe that I was ever that version of me,” Pasko calls to attention how a survivor may gaslight herself into not believing her own experience. The piano gently plays haunting suspended chords that send a shiver down your spine.

The effective chords in “To The Leaves” create one of the scarce moments in the album that evokes emotion. Greenhouse is not emotional, it’s passive and composed. Yet it isn’t devoid of feeling. It’s a document; her words and experiences speak for themselves. In the moments where the piano chords deepen or electronic static takes over the space, they only emphasize the already implicit feelings. We hear this in the closing track, “Intimate Distance,” in which Pasko sings to herself as an act of atonement. The opening piano is unsentimental, but as the song progresses it deepens, at times feeling somber but at other times feeling powerful and majestic. “Intimate Distance” is the final step to moving on for Pasko, she clarifies and makes peace with the pain and love that lie beneath her trauma.

Greenhouse is intricate, intellectual, and complex. But so is the path to healing. By the time we get to “Intimate Distance”, we have seen Pasko face her damage from the past, engage with the possibilities of her future, and deal with all of the complications along the way. Her words are utterly beautiful, and packed with exquisite veiled meaning that would take many listens to fully grasp. From its title to its reserved demeanour that is subtly interwoven with emotion, Greenhouse is an understated work of art that needs to be listened to with willing ears and an open heart.