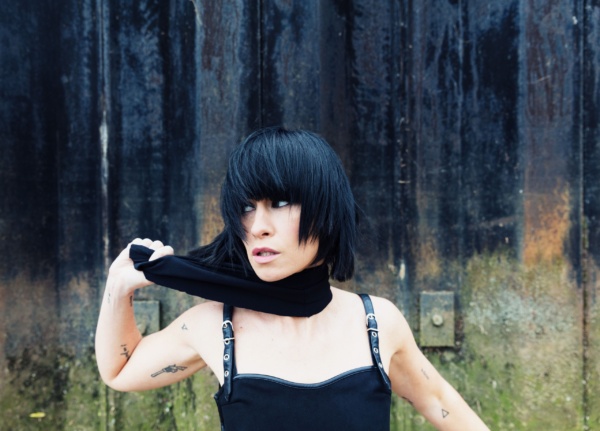 There’s something about a folk/indie vibe that feels so incredibly creepy in the context of horror. (“Tiptoe Through The Tulips”, anyone?) Singer-songwriter Anna Wolf and songwriter/producer Pop Morrison certainly bring this spine-chilling energy to their title track and music video for the horror film “The Unfamiliar.” Wolf is a singer-songwriter and holder of many awards for her sharp and highly idiosyncratic music. Morrison is known as Jamie when he drums for the rock band The Stereophonics, but he transforms into the eccentric and explosive Pop Morrison when he takes on music production.

The music video intersperses scenes from the movie with close up, blurry shots of the duo. With Wolf and Morrison lingering outside the narrative, the video feels like a micro-horror work in its own right. It plays with the dynamics of dark and light, and though it’s simple on the surface, there are layers of intricacy that reveal the deep amount of thought that was put into it. As Wolf sings “the dark and the light” the shot moves from the darkness surrounding her to the light shining on Morrison’s guitar. A fleeting scream cuts through the song as the visual flashes to and from a shot of a child from the movie. These subtle touches add a lot of depth to the video, creating a haunting and memorable performance that finds its own beauty amidst the occult psychodrama of the film.

The music itself is atmospheric, but sparse, leaving you feeling exposed and vulnerable. Voices sweep across the background like the wails of a ghost. Drums beat gently but ominously beneath Wolf’s searing vocals. Her voice takes on the supernatural quality of Kate Bush and Joanna Newsom, helping her to embody the eerie, possessed nature of a ghoul. Even Pop’s guitar has the transient, mystic feel of a phantom, thanks to his precise production. While the rest of the track feeds into the sinister feel of the film, the acoustic guitar adds an interesting fairytale quality that projects elegant indie-folk imagery for the audience. There’s a lot in “The Unfamiliar” that reveals things about the film. Morrison says, “The song sets a tone before you’ve even seen the film, the same way the movie leaves a mark after you’ve seen it.” The duo did an excellent job of executing the vision of the filmmakers, with  the film’s director and co-writer Henk Pretorius saying, “Anna Wolf and Pop Morrison’s music dreamily conveys the dark lure of The Unfamiliar. I got emotional when I heard what they created.”

About The Unfamiliar
The Unfamiliar is an independent horror film, set in the UK and Hawaii, showcasing a melting pot of rising British, European and South African crew and cast members. Directed by Henk Pretorius and produced by Llewelynn Greeff and Barend Kruger, the Anglo-French Jemima West (Indian Summer, The Mortal Instruments) stars as British Army doctor Elizabeth ‘Izzy’ Cormack, returned from war to rekindle her relationship with her estranged family. Alarmed by the numerous inexplicable activities around the house, Izzy seeks ineffectual professional help before confiding in her husband. He believes that she is going through PTSD and advises her to rest and recuperate in Hawaii. It’s there that she gets sucked into the underworld of Hawaiian mythology, as she attempts to piece together the elaborate and elegant puzzle to reveal an ancient and terrifying spiritual presence haunting her family. You can watch the trailer here.