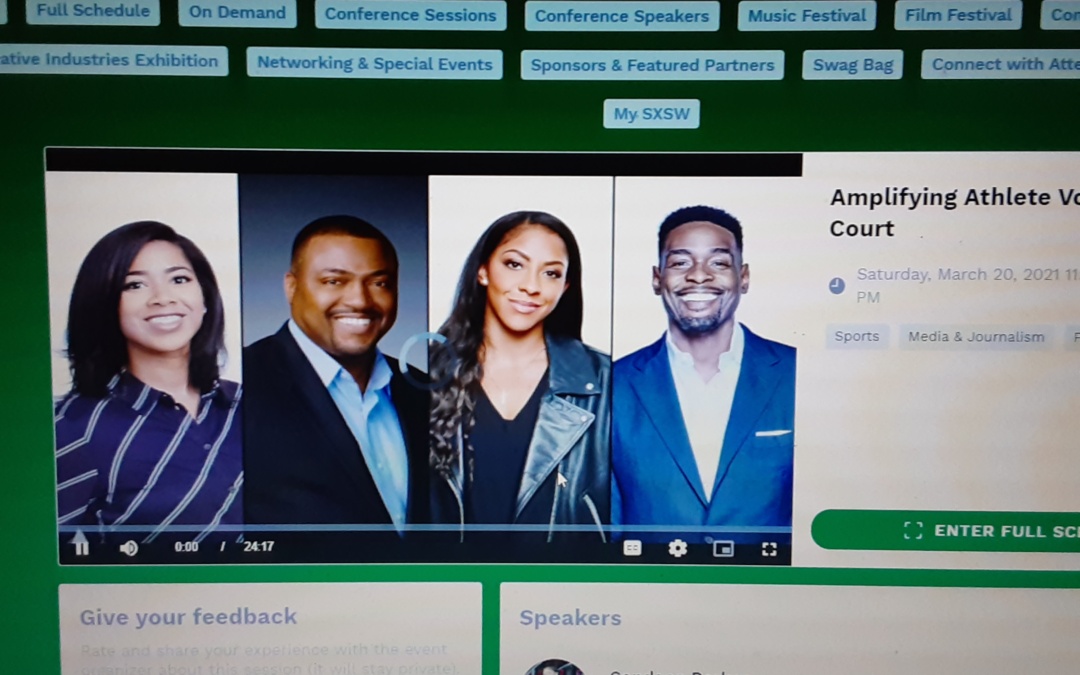 Although there have always been examples of athletes being the voice of social change, 2020 was a watershed year in the fight for social justice. The COVID-19 pandemic and the murders of George Floyd and Breonna Taylor by police officers were three primary events that coalesced in a short period of time to bring the need for social justice to the forefront and the voices of athletes led the call. Morgann Mitchell, Senior Director, Integrated Brand Communications, Turner Sports, moderated Amplifying Athlete Voices Off The Court, a panel discussion during 2021 South by Southwest. Guests were Candance Parker, Analyst and Host for Turner Sports; Eric Jackson, SVP of NBA Digital Content Operations and Diversified Sports Content at Turner Sports; and Chris Webber, also an Analyst for Turner Sports.

When both the WNBA and the NBA returned to playing games during the pandemic, each league was separately sequestered in their own bubbles to prevent spread of the COVID-19 virus. This unique situation allowed the athletes to meet more often and formulate their responses to the deaths of Breonna Taylor and George Floyd.

Mitchell: “How in the bubble were you able to come together?”

Parker: “Preparation is in the small moments when the cameras weren’t there. I think the WNBA was built for moments like this. We are a league of women – 80% are women of color, we have all economic backgrounds, and LGBTQ members.”

Mitchell: “Chris, you were on the air the night Jacob Blake was shot – what was the response of people?”

Webber: “I have to give a shout out to Turner. Turner wanted to know if I wanted to say something. The response was overwhelming great.”

Jackson: “Black voices have been heard for years – Ali, Hank Aaron. The WNBA was great – you left out (Candace) that you were mothers, so you had to balance that as well.”

In the midst of social justice issues, there was an owner of a WNBA team (Kelly Loeffler) that was also running for a permanent seat in the Senate. She opposed the Black Lives Matter stance of the WNBA players and wanted them to keep politics out of the game. As a direct result of this, players vocally supported her opponent, Rev. Raphael Warnock. (Note: Loeffler sold the team in February, 2021)

Mitchell: “How did the senate conversations come about?”

Parker: “I have to speak on leadership of the WNBA and NBA. We have a pretty solid player’s union – in both leagues. There were times we would hop on calls, one time with Michelle Obama. Because we were in the bubble, everybody was connected. We were able to surround that message and amplify it. We could have meetings whenever we want. I really commend leadership of WNBA and WNBAPA.”

Mitchell: “What is your role in this fight?”

Webber: “I think it’s cool that the younger players are embracing what has come before them and taking leadership. I am inspired that the lessons of the past weren’t wasted.”

Mitchell: “How is social media amplifying the stories?”

Jackson: “The beauty is the youthful exuberance of having voices heard. Authenticity makes a difference with social channels. Here is a guy or a lady that looks like me, that through art and expression do their own thing with social media. It’s beautiful to watch. The older people need to get on board.”

Mitchell: “Can the younger generation do or be so much more than the glass ceilings from before?”

Parker: “It is important to see something, but so, so crucial to see someone. This generation has seen so much that they don’t set boundaries and limits. I know my own daughter is this way. They care for others. It means more for Chris Webber to sit here and talk about women’s sports. Like it means more for our white allies to talk about Black Lives Matter.”

Jackson: “I’m a girl dad, (they are in their younger 20’s) so I’m seeing their engagement in the political election. They are seeing the responsibility of voting.”

Webber: “For my son, as a Black male, I hope I don’t have to worry about how he engages with the police later in life. For my daughter, she doesn’t have any limits, she thinks she can do anything! I have twins and they are still small. I’m excited for them to live in the glory of these times. I’m optimistic for the future.”

Mitchell: “Eric, how are you building diversity in your team?”

Jackson: “This is a passion of mine. Didn’t feel good, but felt comfortable for 20 years out of 30 I have been working. I went to a HBCU (Tuskegee University). I demonstrate my work ethic, I speak out. I need to set the example so when the next guy or girl who looks like me is applying to work here, it will be a no brainer. You want to be in the room where the decisions are made – hiring, content – I’ve tried to do that.”

Mitchell: “Why was ownership so important?”

Parker: “I have to make sure that I put my money where my mouth is – to support women’s sports. (Candace Parker is part of the ownership group of Angel City FC of the National Women’s Soccer League.) I am championing women’s sports plus teaching generational wealth. I am looking forward to going on this journey with my daughter – she is on the investor calls with me!”

SXSW Summary:
Athletes have been using their platform and voices for decades to bring light to social issues on and off the field of play, but 2020 brought upon new urgency when COVID-19 and the killings of Black citizens like George Floyd and Breonna Taylor coincided in the span of a few months. Bleacher Report and Turner Sports will bring together a panel of stakeholders including, Turner analysts Candace Parker, Chris Webber and Senior Vice President of NBA Digital Content Operations and Diversified Sports Content, Eric Jackson, will dive into how these brands are concentrated on raising athletes’ voices on social issues to new heights and the importance of highlighting athlete activism.

**elizabeth schneider is a former employee of the NBA and NFL and qualifies as both a sports critic and aficionado.

Elizabeth currently works in ticketing at the premier event venue in Kansas City. She is a freelance writer and transcriber, DIY enthusiast, and has been an overall badass since the day she was born.