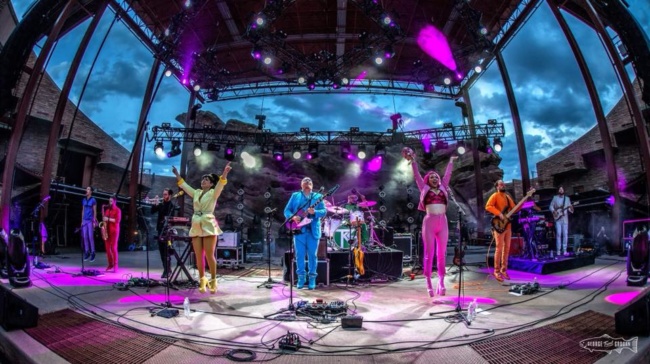 Brooklyn-based power-punk collective Turkuaz – comprised of Dave Brandwein, Taylor Shell, Craig Brodhead, Michelangelo Carubba, Greg Sanderson, Joshua Schwartz, Chris Brouwers, Sammi Garett, and Shira Elias – doesn’t have much time on their hands nowadays, especially with the upcoming release of their 9-track stunner Life In The City. From the first energetic chords of the title track in first position, through the funky underbelly of “The One And Lonely”, all the way through the end of groovy mid tempo dance track “Fight The Fire” in slot 9, Turkuaz dazzles with their impressive musicianship and flare for inventive and fun lyrical content. Don’t just trust us, get your listen to the new album when it drops on Friday! But until then, check out our exclusive interview with the act below.

Based on your new album that talks about the highs and lows of life, what did each of you do to achieve happiness in your own life?

Wow! What a first question! I don’t know if I can definitely say that any or all of us have “achieved” happiness, though we do we quite enjoy a life of making and playing music for people. I think the best you can do is try to do what makes you happy, and put a lot of care and love into it. If you do that, I believe it tends to come back to you in more ways than one. But as discussed on the album, finding happiness in a fast-paced life, surrounded by an often scary world with seemingly diminishing hope sometimes can be very difficult.

That struggle is a lot of what the album is about, but we’ve set it to an energetic and upbeat musical soundtrack to keep it fun and in line with Turkuaz music, which we always want to be uplifting in nature. The lyrics vs. music juxtaposition on the album could perhaps describe an approach to staying happy in life. Even when things seem to be going wrong, an underlying love and appreciation for life can lessen the blow and keep you moving forward. When bad things happen, which they will, a negative attitude will tend to worsen them, but if the underlying soundtrack in your life is that of love and positivity it will make the bad times not so bad, and the good times even better. This more easily said than done of course, but I think can be a helpful guide.

How did the band as a whole, come up with the unique rock/R&B sound?

With 9 band members all with their own musical backgrounds and influences, we’re naturally drawing from an eclectic pool. I think many of us first grew up in bands playing rock music of the 60’s and 70’s, and as we got older we melded that with a style leaning more into funk and R&B. But with an awareness of everything from punk to jazz, we try to remain open minded as far as not limiting where we can go with our writing and playing. Rather than being something we came up with, it’s really something that’s evolved over a long period of time.

While creating new music, who are some of your biggest influences (whether it be actors, musicians, or just important people in your life)?

In the exact moment of creating or writing it, it’s hard to single out an influence that inspires you specifically. Similar to the last question, I do feel like it’s an evolution over time and it’s the culmination of creativity pulling from a wide swath of influences. In addition to some of our collective favorites (Sly and the Family Stone, Talking Heads, Zapp and Roger, Peter Gabriel, Phil Collins, Prince, The Beatles, Rolling Stones, Led Zeppelin, James Brown – I could go on forever) we also influence one another through our musical process, and we derive a lot of inspiration from family, friends and musical peers in our lives, as you alluded to in the question.

When writing new music, what sort of songwriting process do you go through? Is it an easy process, or is it difficult to get the whole band on track?

It generally will start with a demo from either myself or a couple other band members. The demo will usually just involve a groove with some changes of some sort. From that point I’ll usually write over it, and more recently that process has opened up to some more collaboration with other members too. For our recent song “If I Ever Fall Asleep,” I made an instrumental demo and Josh wrote most of the song over it. For “Lady Lovely,” Craig sampled a rehearsal recording we had of some of us (Josh, Taylor, Michelangelo) jamming, and then made a groove and song form out of it, which I then wrote lyrics over, and completed with Sammi and Shira. So it really can come together in any number of ways.

After a demo has vocals put on it, we’ll all start to just play the song as a group, which involves a lot of people making each instrument or vocal part their own and putting their own spin on it. That’s where the most collaboration comes in, in the arrangement process. There are occasional disagreements or divergences of opinions, but all in all for a large group like this of strong personalities, we tend to have a really good time doing it and it’s an enjoyable process from beginning to end.

What are you goals, or what do you want to see happen by the end of this year?

I think it can sometimes be counterproductive to get too fixated on one really specific goal, because it can side track you from looking at the big picture and being ready for other opportunities that may present themselves. Some things come up in a way that differs from the narrative you pictured unfolding, and it’s important to be able to adapt and react throughout that process. All that said, of course we set goals week to week, month to month, etc. — but on an annual or big picture basis, I think the goal is to keep making music that we love and tour the world playing it. Speaking of which, more international touring would be really cool. Let’s go with that!

How does it feel knowing that you have a growing fan base and people who relate to your music all around the world?

It feels really amazing, and it makes any and all discouraging moments and frustration we face not only tolerable, but well worth it, knowing that what we do brings people joy and increases the quality of their life in some way. If making music is a purely selfish act for someone, I don’t believe they’ll have staying power as a musician, because that path leads to a bad place, and the second something throws you off, you’ll be done and no sacrifice will be worth it. Doing it for the sake of spreading joy to others makes it a more honorable endeavor and creates a longer lasting motivation in my experience. It’s the greatest honor we have in what we do.

In the future, what is your dream venue to perform at?

We’ve had the privilege of crossing a few of these off the list already (Red Rocks, The Fillmore, to name just a couple). We’ve even gotten to play at MSG, though it was during a Knicks game… As New Yorkers we certainly hope to do a Turkuaz show there one day. That would be a very big deal. We’d also really love to play at The Gorge Amphitheater!

Who in your musical career helped you to get the place you are at now?

That’s a difficult answer to pin down. Of course we owe so much to the managers, booking agents and promoters who believed in us before (and after) we were better known, and have helped to get us to where we are. We also have an important group of people on the road with us who do a lot off the stage. There are too many people to mention without leaving someone out and we owe so much of what we have to people behind the scenes. But I think ultimately the fans who support us are the ones who decide our fate at the end of the day, and they are the ones who sustain what we do. Not to mention that this band has 9 really dedicated musicians who have sacrificed endless amounts of time and energy into this project, long before anyone knew who we were. There is a still a lot of work to be done, so I don’t feel that we’ve “arrived” so to speak in any way. But it’s important to find people that you like working with throughout the process, because the process at the end of the day is the experience that you live. Results can be gratifying, but ultimately you’re gonna always want more, and day to day, you want to do what you love with people that you love. That dynamic is what I believe will create a sustainable and enjoyable career in music that’s poised for growth.

How did you all meet each other?

Most of us were friends up at Berklee in Boston during college. We moved down to New York after school and over the next several years, we played shows in clubs around the Northeast and our lineup solidified into the 9 people we are today. We’re all really good friends and act a lot more like a family, which I think is a key ingredient in our ability to spend nearly all of our time making music together.

What do you do in your free time that helps contribute to the songwriting process?

I’m sad to say I don’t personally have a ton of free time these days. If I’m not on the road, I’m in the studio working on Turkuaz, or producing other bands. That can actually become a real difficulty for writing songs, because you have to let some inspiration come in in order to have something to put out. For the first time in the last few years I’ve had to specifically dedicate days for writing material, but of course inspiration doesn’t always like to come on schedule. Luckily, I think my mind is always looking for patterns, catch phrases or fun ideas, and often I’ll wake up in the morning with a musical idea buzzing around. So much of it comes from that intangible place, and I look back after an album is done and I can’t specifically remember where any of it came from. I really like that mystery being part of it, and continually feeling like there’s some creative energy pouring through that isn’t coming from me, but I’m more of a vehicle for it to deliver itself. Some days or even years I feel more of that happening than others, but I think that’s when the best work comes through.

Keep up with Turkuaz here.