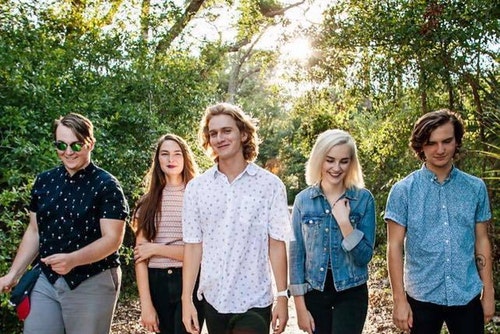 With two stunning EPs and two singles under their belts – including one acoustic rendition – five-piece indie rock dream Flipturn has been taking east coast stages by storm while on tour with crunchy indie group *repeat repeat. I was lucky enough to catch them in Philly on the second night of their tour, following a DC performance the night before.

Flipturn has become one of my absolute staple favorites since discovering them in March – a discovery made from a particularly spot-on Spotify algorithm, might I add. Even as I’m sitting and writing this, I’m having a hard time accurately conveying my excitement for just how stoked I was to see Flipturn, and for just how tight of a show this group can put on. Let’s get into it.

Just as I was entering the upstairs of The Milkboy, Flipturn was launching right into “Cold”, the second-to-last song off their first EP titled Heavy Colors (2017). This song acted effectively as a primer; the base layer that Flipturn would swathe their canvas with, a rich and varying sample of their sound. Vocalist (and rhythm guitarist) Dillon Basse’s crystal clear, operatic bellows soar with a fervor unmatched alongside piercing leads from guitarist Tristan Duncan, the kind that drift away and carry you with them. Madeline Jarman’s bass grounds us, reminding us that we are still desperately running to keep up with our own heartbeats; all in harmonious contrast with Taylor Allen’s synth, which subtly lifts us to the dreamy stratosphere, filling the space as it floats by. Drums from Adrian Walker are compelling when they need to take the wheel, and subdued at all the right times, building captivating suspense as each song plays out.

Following “Cold” was “Churches”, which the band released as a single before its official release on second EP Citrona, out in 2018. This punchy, electrifying track is arguably the band’s angstiest, and it was an absolute headbanger – halfway through, I turned around to check out the crowd, and it had easily doubled. On the recording for this song, there is slightly more distortion placed on the vocals, almost like screaming into a 1930’s telephone (I say this genuinely and endearingly) – and Basse’s vigor and rasp as a live performer matched this intensity perfectly.

Next was a new song that hasn’t been released yet, but judging by its subject, I might guess that it will be titled “Eleanor”. The bass-heavy, disco feel of this song definitely piqued the crowd’s interest as much as the ones they knew and sang along to. Following that, a cover, and a modern classic at that: “Hold On” by Alabama Shakes. Flipturn’s insertion of their gritty yet uplifting indie glitter gave the song a fresh and welcomed twist. Basse made sure to shout out dynamic frontwoman Brittany Howard, as well as encourage the crowd to check out her new solo work, released earlier this year.

On Citrona, instrumental opening track “Fletcher” bleeds into “Six Below”– which is exactly how Flipturn played it live. “Fletcher” starts off minimally, adding layer and layer of perfectly syncopated lilting rhythms from Basse on guitar and Allen’s synth alike, topped with Duncan’s undulating lead guitar that yearns for another summer. The transition into “Six Below” feels like that brief, liminal space between dreaming and awareness, and it isn’t until the first chorus that you have to truly face the world, as Basse declares, “I know what everybody knows: Die young or you can grow old, until you’re buried six below”.  The incredibly fast drum fills and solos from Walker were outstanding during this number.

“Hippies” haunts in all the right ways, and left me feeling nostalgic for memories that weren’t even my own. Basse’s ringing falsetto paints like an old film, reminiscent of all those who have loved and lost before himself. The buildup towards the end up the song held just the right touch of suspense, lifting up the audience just high enough to drop back off with a satisfied head nod at its break. The final line of each chorus, as well as the song, mourns: “I lost you”.

Between each song, Basse must have called out at least thirty different variations of “Thank you!” and “You guys rock!” following the eruptions of applause and “Woo!”s from the crowd (here’s hoping I was the loudest there). Then, he and Jarman playfully requested a name for their next song – another new and untitled one. Several jokes were called out, but we’ll have to wait and see what they end up deciding for it. On this track, the most dominant melody came from Duncan on lead guitar, heartily met by a much more frequent use of falsetto from Basse. Basse is also an unstoppable dancer; I swear, he never stopped jumping back and forth during the entire set. His buzz was infectious.

Basse announced they had two more songs. The group was met again by cheers not lacking in volume, but, knowing that it would inevitably end, the celebratory air that begins every night of excitement had shifted slightly, preparing itself to begin missing the experience. The first twinkling strums of one of Flipturn’s biggest hits began, “August”. To say that this song is sweet or nostalgic might be cliché, but not out of line. The first line is an invitation to open the storybook: “August, honey, tasted sweeter with you.” Every summer love, every youthful flashback, every ray of sun entering your teenage bedroom is captured in this song. The perfect song to fall in love to, to have your heart broken to, to fall apart to – and it happened live, all at once, for about fifty of us in that room. “I loved you from the start,” Basse wails, each note rising to surpass the last – eventually leading up to a perfectly stacked buildup that meanders at first, then meets you face to face, as if to settle matters for the last time. The crowd went wild.

The final song of the night was “Nickel”, paralleling its closing on Citrona. On this upbeat, choppy anthem, Basse demands the truth. “Was I just told a lie my entire life, thinking I’d be great?” The song carries out with a chant that Basse invited the entire crowd to chant, clap, eventually scream along with many times over, as the intensity increases: “I give it all up for a bottle of wine, about two feet tall, three inches wide; I’d rather be drunk, or out of my mind, than trade my soul for nickels and dimes.”

After graciously accepting the mountainous applause and cheers following this track, Basse’s and Jarman’s eyebrows raised as the crowd began chanting unanimously, “One more song!” Jarman made a slashing motion to her throat as Basse stepped to the mic, jokingly exasperated with palms extended at his sides and an ear-to-ear grin, to remind the crowd, “We’re the opener! We can’t play another, we’re the opener,” The cheering finally subdued, some music began on the speakers overhead to fill the space, and fans flocked together to discuss what they had just heard.

Flipturn put on one of the more solid shows I’ve seen of any indie touring group, touring or not, and I will definitely be seeing them next – and hopefully every- time they come to Philly in the future.

a conversation with a day without love

Happy Pi Day! We are over here celebrating with some apple pie and basketball, but first thing is first: a new podcast episode. For our 4th installment, we sit down to chat with Philadelphia-based A Day Without Love (Brian Walker) about the way he serves his community, his music influence, and, of course, anime.

Keep up with A Day Without Love here. 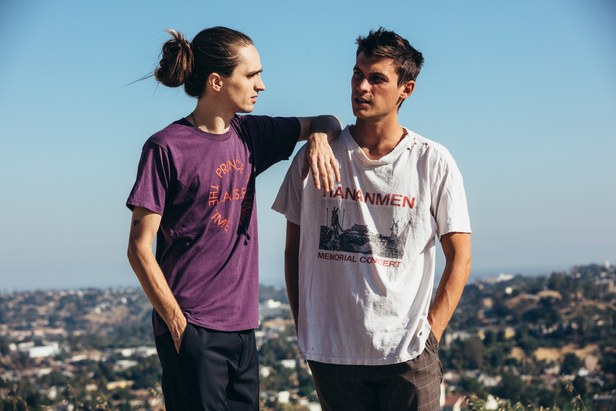 Starting September 10th, Los Angeles-based indie duo Swimsuit Issue – beautifully executed by model Miles Garber and David Gagliardi – is hitting the road with alt-pop musician Julietta for a couple of enthralling dates on the east coast. Seeing as their work has been touted by some quintessential names in music – their first show was playing to over 1,200 Catpower fans when Chan fell in love with their first single – Catch them in Brooklyn at Elsewhere (Zone One) on the 10th, and in Philadelphia at Kung Fu Necktie on the 17th. We’re thrilled to see their live performance magic captivate more audiences and expand the fanbase. Start your research below before heading out to one of the shows in a few days!

Keep up with Swimsuit Issue’s new work here, and keep tabs on Julietta and her upcoming music here. 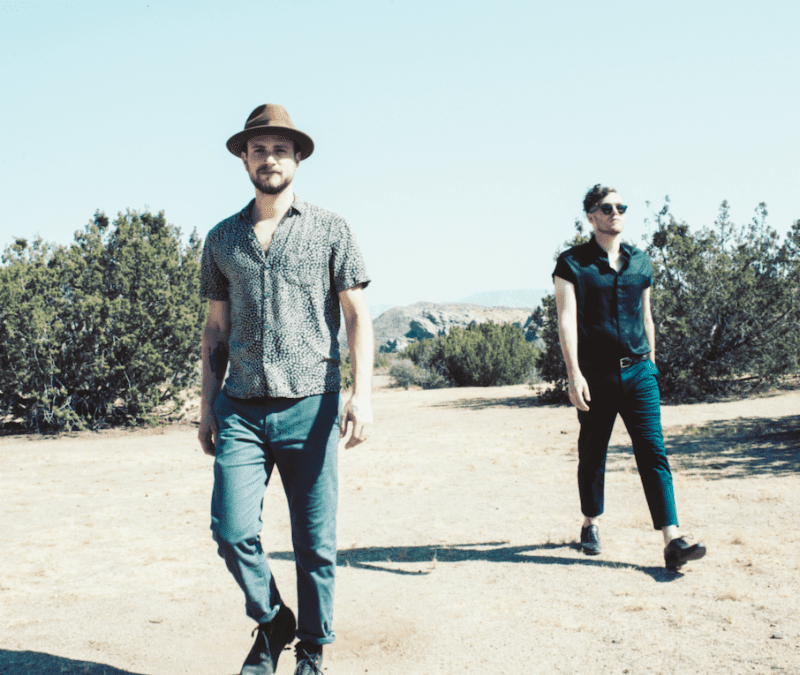 Need a little something to get you going today? Look no further. Indie rock duo Flagship has just dropped a new single, “Philadelphia Babe”, and it’ll get your soul moving. Based in Charlotte, NC, Flagship is made up of vocalist and guitarist Drake Margolnick along with drummer Michael Finster. The duo, both songwriters, joined forces to create Flagship in 2011 after Finster left his previous band, Campbell.  Keeping the ball rolling after their 2017 EP, The Electric Man, Flagship will be dropping their upcoming EP, The Ladder, this April. Currently, they’re touring in support of Blue October’s spring tour. Flagship has already previously released a song by the same name, which you can listen to here. “Philadelphia Babe” is a moving, riveting track about the breathless days of finding new love. Paired with an irresistible beat and filled with undeniable motivation and feeling, this song displays some of the best aspects of Flagship. It’s the type of song that brings new listeners into the mix as well as making longtime fans happy

What are you waiting for? Give “Philadelphia Babe” a listen (or a hundred) and keep an eye out for The Ladder, out this month.